- Blogging in bullet form feels rather apropos for a Friday. I shouldn't be expected to neatly craft a whole masterpeice theatre (ha- as if that is what I do around here anyway) right before a weekend. That, and my brain is fried... like my toaster oven.

- A toaster oven? Top 5 must-have appliance, in my opinion. Especially if you have kids, but we used it constantly as a childless couple. I don't know why others insist on plain ol' toasters. I can toast a whole sandwich, melting the cheese and making a regular turkey blah sandwich into a mound of melty deliciousness. Can you shove a heap of coldcuts and cheese down your slicey-toaster? No. That would be messy- and probably end in a small house fire.
Never mind the fact that when you're making chicken nuggets for wee ones, you only need to bake a small tray- a four year old isn't hoarking down twenty nuggets- why heat up the whole oven (and the rest of the house, mind you) for ten nuggets? Toaster oven: the only way to go. We've had our current toaster oven for... eight years? It is begging to be send to the happy toaster heaven in the sky for some time now. Surprisingly, it is really difficult to find a decent toaster oven! I am determined to have a new toaster oven by the time we move into New House. (TM)  How much do I want this sweet baby? Sooo much. Can I justify a nearly $300 toaster oven to The Husband? Negative, Goose.

- I trimmed the girls' hair this morning. I've had too many "Super Cuts" experiences in which the "stylist" has simply butchered the kids' locks. I could have done a better job- and I did not attend the Fantastic Sam's 6 week course for beauty school drop outs. I've decided to save twenty bucks and branch out on my own. I can at least get the same to better results hacking it at home. It's not the best job, but it is most certainly free. Hopefully the four year old aesthetic will not mind. The chances are high that at some point- probably in the midst of awkward middle school years- the girls will insist I retire my scissors for good. 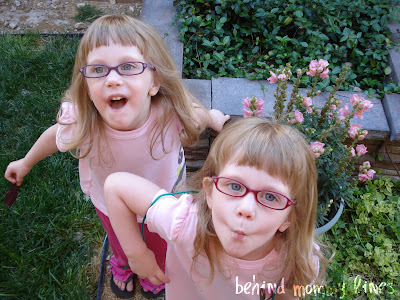 It has apparently been dubbed "silly face" day.
- I am currently restraining myself from using my fantastical hair snipping skills on my own hair. (Bad idea, right? The Husband argues yes. But he isn't exactly volunteering his time to watch the girls while I go to the salon, either) Either way- I am getting a haircut. (this needs to happen more often that once a year) I'm pretty set on bangs. I haven't had bangs since gradeschool. I am 50% sure I will hate them. I just need a change. And I still have my post-pregnancy chipmunk cheeks, so short hair is out of the question. I'm going for the Kelle Hampton look:

image from Enjoying the Smal Things
Cute, right? Love the piggy braids. And the sunglasses. The belt/hat combo? LOVING! And I would kill to have her figure! After two kids? Life is totally not fair, I tells ya!
- This is turning out to be a little... lengthy.
- I am currently rocking Army of Freshmen Beg, Borrow, Steal on the ipod. Little Man is waving his chunky little arms to the beat. The girls are upset it isn't Yo Gabba Gabba, and have retreated to the backyard where they can poke potato bugs with sticks. Ah, Army of Freshmen... It takes me back. Oh, the crazy college days when electric keyboards were "making a comeback." ...Or maybe it was just me; that sentence just doesn't sound right.
- Starting on Monday, I will be in the last and furious days of packing up all our accumulated crap and saying goodbye to our home. It will be bittersweet- there may be a photo montage in the works. Then again, a road construction project has begun recently. It's one of those special middle-of-the-night-so-we-don't-muck-up-traffic jobs. Our house is positively vibrating... the shutters bang and make this loud ruckus... due to the jackhammers at 1am. So I may not be too sad to leave this house after all.
- I ONLY HAVE ONE WEEK! How are all the drawers and cupboards filled to the brim again? The clutter has got to be multiplying like bunnies. Conversely- I ONLY HAVE ONE MORE WEEK of relative camping in my own home! Wheee! I can wear clothes again! (never pack your clothes and leave yourself with three outfits- mostly comprised of yoga capris and baggy tshirts- before you actually move)
- In less exciting news: I am at war with the water company. Upon calling to transfer all the utilities to New House, they informed me that I would have to put down a deposit of three hundred big ones (meh, ok)... that they would hold for TWO WHOLE YEARS. (Whaaa?) Apparently my Pay-Bills-Once-A-Month strategy has a downside. The water company has their panties in a bunch because the payments (of like, $10-$20) are not "on-time." Now I have a "bad credit rating" with the annoying water company. And they are going to make me pay big time... to have my water turned on. Communists! I'm taking my business elsewhere! (Except that my family has become... accustomed... to indoor plumbing- drat)
Posted by craftyashley at 10:35 AM
Email ThisBlogThis!Share to TwitterShare to FacebookShare to Pinterest