If you've been following me on Twitter, this is most likely old news. On Friday, our day was turned upside down as Little Man, excited about testing out a new toy was jubilantly running/bouncing back and forth down the hall. I took this time to fold some laundry on my bed while watching him play. He repeatedly asked me to play with him, but reluctantly I decided that the laundry was pressing. I regret this decision quite a bit in hindsight. Little Man took a couple small spills, and I tried to remind him our rule of NO RUNNING IN THE HOUSE. This is the exact moment in which the kid tripped over his own feet and sent him careening into the master bedroom, head first. Sadly, his head met with the metal railing supporting the mattresses. I heard a cry, not his usual scream, but one of real distress. I whipped around and picked him up only to see all the blood. The gash in his forehead was long... and deep. This is the point in which I lose all my sense. As it turns out, I am useless in an actual emergency. I flew down the stairs and immediately called my mother. I couldn't even tell her what happened as I was both screeching and bawling at the same time. Miraculously she made out "please come here now!" Apparently this was not enough for my frenzied state, so I called up The Husband at his job and continued to make zero sense, squawking on about ALL THE BLOOD! (my apologies to a helpless and probably very concerned Husband) Thankfully my Mother, who does not revert to disastrous mess in an emergency, called me back to make sure I was applying pressure to the wound. The Husband also calmed me down enough to remember that we had first aid supplies in the master bathroom cabinet. Yes, I went from being 5 feet away from gauze to the downstairs, trying to quell the rush of blood with a paper towel. (I am just so darned competent!)Eventually, we made it to the urgent care where it was confirmed that Little Man would need quite a few stitches. While watching the doctor poke and sew away at my baby's flesh, it became apparent that I was going to faint. Which really made me mad! Luckily a nurse noticed that my face had turned white and that I was starting to sway, so she swept me over to a chair and instructed me to put my head between my knees while they finished up on Little Man. The same Little Man, who only cried a little at the numbing anesthesia, was laying calming, eliciting tons of praise from the nurses and doctor. That boy is hardcore- I am a wimp. These days my time is spent agonizing each and every little stumble, more pleas to STOP RUNNING IN THE HOUSE, and the occasional WHY ARE YOU LEAPING FROM THAT CHAIR?! The boy is hardcore- to a fault... and keeping him from further harming himself is a stressful and terrifying job. Would you like some pictures? Good, because I have a million. 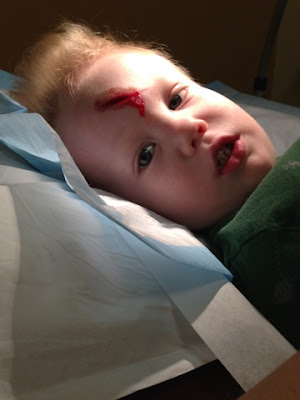 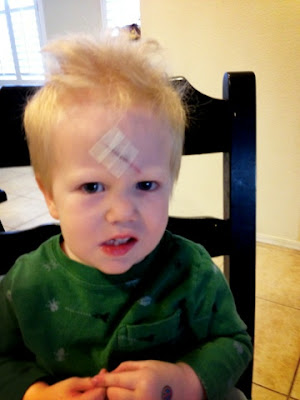 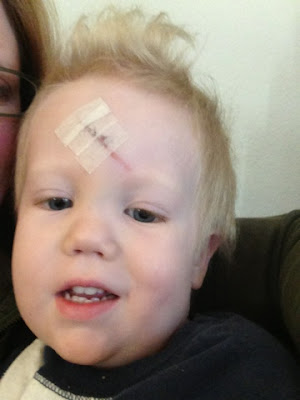 Posted by craftyashley at 2:30 PM
Email ThisBlogThis!Share to TwitterShare to FacebookShare to Pinterest