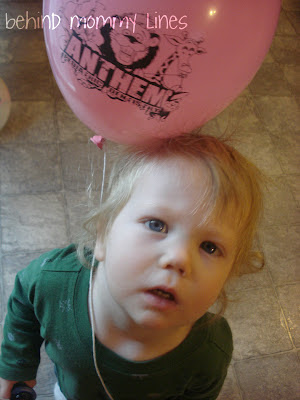 Baby carries balloon everywhere. Eventually he builds up enough static cling to persuade the helium to relentlessly gravitate towards his electrically charged noggin. I pluck the balloon from his head and force it to obey the rules of physics, pulling on its string tether in the sky. As soon as Little Man moves an inch, the hair standing straight off his head coaxes the balloon to suck back onto the kid's scalp.

This game of intrigue continues until I am restraining myself from popping the balloon with extra-pointy scissors.

Do balloons totally throw off the natural balance of life at your houses, too?! I swear, as soon as a balloon enters the building, my kids lose all composure. They're bouncing off walls, they're bopping the balloon like a boxer practicing for a fight, they're actually fighting over who has what color balloon.

Assuming there is more than one balloon, the strings WILL get tangled up. And it may or may not take a zillion years to detangle the labyrinth of colorful ribbons and the toys they are anchored to.

I have my theories that balloons are like airborne crack. Any and all children within a mile radius will instantly erupt in manic, insane behavior that JUST SEEMS non-balloon related. I've tested this theory, as soon as the kids are sleeping and the balloons are disposed of (ie: popped in judicious malice) the children are totally changed, the "excitement" is taken down a couple notches, automatically. Life without balloons present is quieter. And that is weird. They're just balloons. 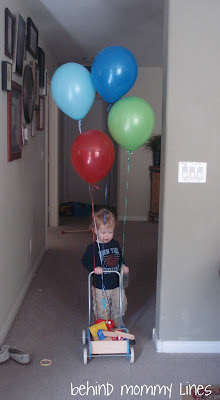 This particular batch was the balloon bouquet from hell. We paid a couple dollars extra to get the "good" helium... and boy howdy- those suckers stayed aloft for A WEEK before I got stabby with the scissors and prematurely ended their "season."

I was hot off the tails of this draining week-long balloon experience when I took the girls for a dentist appointment- a 9am dentist appointment. Why did I make it for 9:00?! I must have been HIGH, because it was NOT FUN getting everyone up, ready, and out the door by that time. I am dreading kindergarten, as I'm pretty sure it starts early in the morning, too- that's going to be ROUGH.

So anyway, I took the kids to the dentist and found out Bunny's teeth are doing good. She has some almost-cavities, but they have not changed since the last xray, 6 mos. ago. All the flossing has paid off, the flossing every night that makes me want to pull my hair out every night as I JUST WANT THEM IN BED, ALREADY. It paid off... but only for Bunny.

Squirt's same almost-cavities are progressing into the need-to-be-filled, actual-cavity sort of problem. Did I mention we're talking about FOUR possible cavity riddled areas?! After extensively talking to the dentist we resolved to wait another 6 mos. and hope for the best. (all the while flossing incessantly) Then during the actual cleaning portion of the visit, Mr. Dentist found YET ANOTHER cavity in the mangle of forest that is Squirt's lower front teeth. (the girls got my ittybitty tiny mouth) The doc says these front teeth should fall out soon anyway, so we're not bothering with them. Which is fine, except that I can actually see the cavity when I brush her at night, and well, I hate that. It bothers me. No, it openly mocks me from her mouth. Stupid cavity.

How is there such a stark difference between the two mouths? They're twins! Identical twins! Who eat the same things! I brush & floss them one after another! The level of care is the same! How is the cavity situation so different! Ok, dental rant over. Sorry. Get a little carried away about dental health I suppose.

BACK TO THE POINT: The twins left the dentist's office with two more balloons. Thankfully, Little Man bit into one (yes, he tried to BITE THE BALLOON) and it popped before bedtime. The second balloon is still lazing around the house, being fought over by all three children... and now that I think about it, I am going to pop the darned thing RIGHT THIS INSTANT before anyone wakes up from naps.


Posted by craftyashley at 2:34 PM
Email ThisBlogThis!Share to TwitterShare to FacebookShare to Pinterest