For some inexplicable reason, I end up having a hard time sleeping on Tuesday nights. I know it is Tuesday nights because I invariably crawl back downstairs and watch Teen Mom until the urge to fall into my bed strikes.

I'm not just having problems sleeping, I am also having problems blogging. I sit down and... blech. I have nothing to say! Everything I get out of the keyboard is just painfully lackluster. I even sat down and made a graphic. A graphic. It's my new "motto" for the year, replacing the old motto of: "POWER THROUGH THE CRAZY." I have been "powering through" for a rather long time now. Perhaps I am just TIRED.

Oh yes, the graphic. I spent an unwieldily amount of time on it. So you must lay eyes on it. 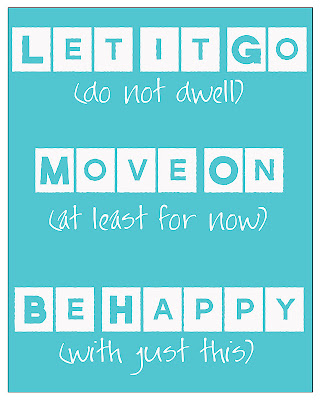 At this point someone is bound to suggest professional therapy. I promise, this is nothing serious. I've just got nothing of pertinence to put out there. I feel totally off. As in not myself. And I'm hoping this is a temporary thing, that once some things "wrap up," I shall be back to the normal/crazy instead of the basketcase/crazy that I seem to be at now. There have been times when I feel as though I need an emotional adjustment- could I get that at some strip mall chiropractor? One located next to the mandated nail salon?

In fact, I'm considering deleting this entire post. Mostly because- whine much, lady? Who would want to read this? I guess I just feel like I owe The Internet an explanation. A vague-ish, entirely unsatisfying explanation.

Posted by craftyashley at 10:12 PM
Email ThisBlogThis!Share to TwitterShare to FacebookShare to Pinterest