This morning I bolted to a sitting position in bed. Because something in my dreams a second before the baby woke me up had reminded me of something from real life: THE GINGERBREAD HOUSE.

I had completely forgotten about the gingerbread house. The really cool, super awesome activity I had suggested we do with the kids on Christmas Eve. It was such a hit last year, I wanted to do it again. The little kit had been so easy, so un-stressful, and just plain fun.

Later that morning, after prodding the children along to hurry up and get ready to go, we set off in search of a gingerbread house making kit... two days before Christmas. The first stop was my old standby- Target. (you can say that with a French accent, it's ok- I do) The shelves of the holiday aisles were practically bare, and the workers in red were tearing some of it down. This was not looking good. Nonetheless, I asked one of the associates if there was any chance of finding a gingerbread kit. He kind of chuckled and told me the chances were slim. He walked down a couple aisles, surmising the paltry offerings and told me if I had the time/will, I could have them call other stores to see if anyone had any stray kits. Then he sent me on my way... where I piled other stuff that was not on the list into the cart- I CANNOT RESIST THE POWER OF TARGET.

My next stop was World Market, where last year's kit had come from. I was certain this would be THE PLACE. Except that I had 30 mins to kill before World Market would open its doors. That is how I bought a hair clipper at Big Lots for $17... and two cookie sheets. At the stroke of 10am, I stormed the World Market, cookie sheets clanging in the bag. I circled, and circled. Then hovered. Then started to mentally freak out. Surely they would have a ton in the back, right? The mysterious storage warehouse behind the flappy doors where I assume all the cool stuff stays to hide. I asked a lady, and she chuckled. "You're the second person to ask me about gingerbread houses. And sorry, we are all out. I hear there might be one broken one at a store across town, though."

I returned home with everything under the sun... except the one thing I'd went out to get- the darned house kit. I was left with two options: bag the activity entirely (even though I'd psyched the girls up about it ahead of time) or go on Pinterest and make my own FROM SCRATCH.

Being the terrible baker that I am, I realized this would most lead to an end-product entitled Gingerbread House: After the Fire. There was no way this would turn out to be anything but a steaming pile of disaster.
I scoured the internet for easy-ish recipes. Wrote down a list of ingredients my pantry did not contain- things like MOLASSES. I plucked three kids out of naps and took them on the run- again. The grocery store was not as busy as I had planned, being two days before the big day AND after 5:00.

You know what I found? A huge giant stack of gingerbread house kits. And next to it, a gingerbread TRAIN kit.

So, this is pretty much the best evening ever. Crisis averted. I now have two houses and one train kit just waiting to be frosted together and sprinkled with candy. On Christmas Eve.


And this happened today too: 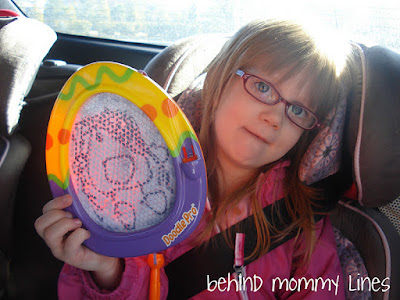 My baby made a really cool picture. Things like this never cease to amaze me. Is that drawing totally awesome, or what?! Gold stars to Bunny.

Have a very happy holiday weekend!
Posted by craftyashley at 7:50 PM
Email ThisBlogThis!Share to TwitterShare to FacebookShare to Pinterest