Unfortunate Before and After

I thought I did a pretty stellar job of babyproofing when the twins hit toddlerdom. The girls never climbed to unreasonable heights. They never caught hold of dangerous household items. I was incredibly pleased with myself.

That would all come to an end as Little Man grew into his reign of terror. He's into EVERYTHING. ALL THE TIME. It's driving me to madness. And there is only so much I can do to prevent it. Yesterday was particularly problematic as I found him on the kitchen island with a knife (from slicing bananas) in his mouth. You heard me! In his mouth! A knife! Then, later that same morning, he somehow found a hammer- a real hammer. There are not words to describe finding your toddler armed with a HAMMER. Had you asked me prior to the incident where we kept the hammers, it would have taken a while for me to answer correctly. (apparently we keep a hammer in one of the kitchen drawers- he can reach into drawers now) These were just the most egregious events. He is constantly climbing up onto the counters and spilling cranberry juice all over himself... and other things I would rather not be covered in sticky juice. He climbs up onto the same counter and drags a half empty carton of yogurt the girls have abandoned around the house, smearing it on the walls.

People... it is a nightmare at my house sometimes.

I decided to try yet another extreme step to rectify the situation. This is after putting locks on every cabinet, relocating all the office supplies to various new places in the house, and pushing everything on the counters or the dining room table a minimum of six inches from the edge, hiding the diapers & tubes of Desitin, and stripping down most of my decor, we have moved one step further to the feeling we are living in Denny's: 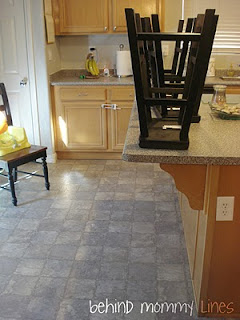 We're hoisting the stools ontop of the counter, straight up restaurant style. Looks lovely, no? And oh so practical come meal or snacktime. Love lifting those babies up and down a zillion times a day. You may notice the highchair strapped to the dining room chair? It will come into play later... 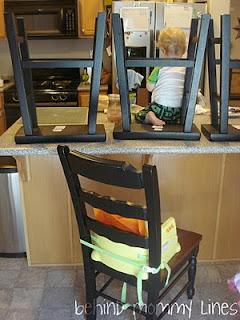 It's as easy as pushing the highchair over to the counter. 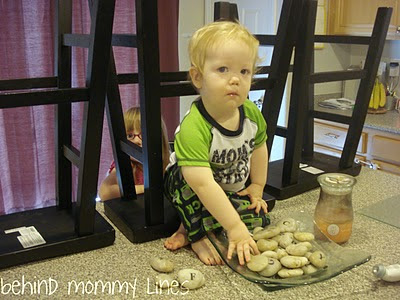 Your foolish attempts to contain me are useless, silly woman.

I'm convinced that I am raising the next Mac Gyver over here. So now not only do I store the stools on the counter, I have to move the highchair over to a carpeted area. (where I assume he cannot easily push it anywhere he pleases... yet)

Question to all you parents of "adventurous" children out there: At what point do I stop feeling like I live in a maximum security prison?
Posted by craftyashley at 3:34 PM
Email ThisBlogThis!Share to TwitterShare to FacebookShare to Pinterest