Lemme Tell You Something About Cherries:

They pretty much suck. 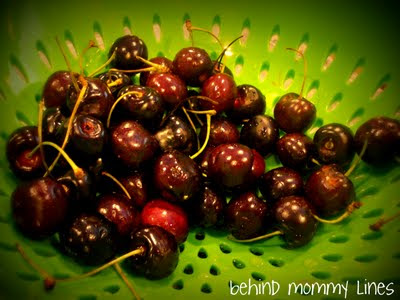 Do not be fooled by their red, shiny lustre.

Do not be fooled when they are on an incredible sale.

Do not be fooled by their "portable" appearance.

I give my kids grapes when on the go. Grapes are yummy. And after we went through all the color varieties of grapes, my eyes started to wander... the cherries! The cherries are so cheap! And the girls were bouncy in jubilation when I bought them cherries.

The appeal wore off once we learned cherries have pits... I mean, I knew this fact... I just thought we could eat around the pit, or they were easily removed or something. (Hint: the pits are not easily removed) It ends up being a messy, stain-y, not 4 year old exciting business. 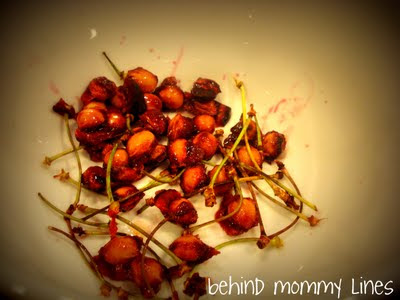 They stopped liking the cherries so much. I was just glad we miraculously avoided staining some very cute clothing.

I ended up with a lot of cherries on my hands. Without any mouths who wanted to gobble them up. And they were kinda going... er, bad.

But still, I had to pit and half four cups of cherries. When Mama makes brownies, she scoffs at the 9x9 pan. Mama doesn't make homemade brownies, either... she uses the boxed stuff. And doubles the recipe to make a REAL pan of brownies, a 9x13 pan.

... and they were pretty scrumptious.

Posted by craftyashley at 7:40 PM
Email ThisBlogThis!Share to TwitterShare to FacebookShare to Pinterest