So this whole Harry Potter craze. I will let you in on a little secret: I haven't read any of the Harry Potter books. Not one. None.

You see, when Harry Potter came out, I was in college. My brother, my Dad, pretty much everyone else on the planet was in love. My brother and Dad tried constantly to get me into it. "Here! Borrow my copy!" "I have them on audio book- you can just listen to them! You have time for that!"

I would rebuff all attempts at getting me into the Harry Potter phenomenon. Not because I didn't like to read. (I love to read, btw) It's just that... well, I was in COLLEGE now. I wasn't going to waste my time on some kiddie book. I was a college student, I had to do college-y things. Intellectual things. Like read War and Peace or something. I was really into biographies, and other such things. (tangent: found Life With Picasso in college, changed my life- became an art major. Also Marie Antionette: The Journey was fascinating... with a capital F!) I was attending a University! I was being scholarly! Don't try and bring be down with some children's nonsense about "wizards" and "magic-ery!"

So bottom line: I was too cool for school.

I was dragged to the movie, Harry Potter and the Sorcerer's Stone at some point. It was a movie. Ok. Fine. I mean, going to silly movies- not going to destroy my street cred. on campus. (Ha- like I was the "IT GIRL." No.) Everyone sees silly nonsense movies. Unless you're a film connoisseur- of which I am not. (Clearly, because I do not wear a beret... or watch foreign films neither with or without subtitles) 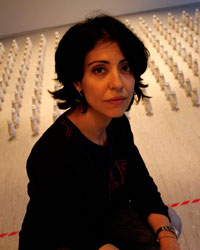 
Like this chick- only with a beret: Snooty Film People.

I kinda loved the first movie. It was fun, and the attention to detail was amazing. It had a great "feel" and I was gelling with it. Except that I heard the overwhelming feedback from the book fans about how terrible they thought the movie was. Oh! It just was awful! Couldn't hold a candle to the book! The movies became dead to them!
I believe there was some sackcloth and ashes involved.

So I began thinking, sheesh! The movie was pretty awesome. I would see more of those movies! And I did! I saw the second one. Good stuff, good stuff! Me likey. And then again: The book is SO MUCH BETTER! It will absolutely RUIN the movies for you.

Well, person who is obviously very invested in this franchise: I don't want to ruin the movies for myself! They had entertainment value in and of themselves, and the fact that the author, JK Rowling was heavily involved, I saw merit there. I made a pact with myself; I won't read the books until AFTER I've seen all the films. That way I could enjoy both mediums to their complete and fullest extent.

I remember getting gaping stares from people when I told them my plans. They could not fathom such a thing. Then others thought I was one of those schmucks who say "Why read the book when I can just see the movie!" Let me make this clear- ABUNDANTLY CLEAR: I like books. I like to read. I am not an uncultured heathen who does not enjoy the printed word.

Even if I do watch copious amounts of television. (Almost obscene, the amount of TV I watch) But then again- I have three kids now. I spend a lot of time confined to my house.

So- the books. You have no idea how hard it became to resist reading the books. After each new movie came out I JUST HAD TO KNOW WHAT HAPPENED NEXT! I had to! Luckily, my will was strong and I was convinced the whole Harry Potter thing would be better this way. I resisted.

And because everyone just assumes everyone else has read the books to some extent, (can I get a show of hands of who hasn't read a Harry Potter book? Anyone? Anyone?) I was able to steer clear of spoilers. Except for finding out that Dumbledore dies- Trent let that one slip... he felt terrible about it, so  I didn't sew up his lips on premises.

Let's fast forward to a few weeks ago: I saw the last film, Something about the Deathly Hallows Part 2. Good stuff again. And now... it was finished. Time to start up on the reading.

My Dad offered up his audio books; I decided I can't listen to the books. I hear the narrator is amazing and really enhances the experience. But with my lifestyle as it is now, wouldn't be feasible. My only Harry Potter time will most likely be during naptime. I need to be able to hear the monitors-of-screaming-banshees, and I just don't know if I like the idea. I can't read each book in one sitting, starting and stopping... seems like "listening" would be difficult.

Trent, my brother, offered to lend me his mostly first editions. But I saw him cringe when the baby smeared dinner all over his hair. My brother is very particular about things, and well, those books are pretty precious to him. So I spared him the worry and possible heartbreak of a curled page.

I tried the library. I was unprepared for the scope of this Harry Potter madness, however. 98 copies in our library district. All of them lent out. Three people on the wait-list. And this was just for the first book. Crazy talk.

A search on Amazon yielded two options: paperback (on sale for around $50) or hardback. (again on sale for about $120) I was reticent. That seemed like an investment.


I browsed around Craigslist. Not a one returned my email. It blows my mind how lame people can be with Craigslist. The other fifty percent of the time, I've had really pleasant and great experiences, though. To be fair.
My Mom has been into eBay lately. I don't know why, but to me eBay seems so 10 years ago. But guess what? eBay is still a thing! I revved up my old username (made when I was like, 15 or something) and bid on a slightly used hardback set. I was counting the minutes away- 9 minutes! And they're mine! The Husband would chuckle in the background. I get hysterical about auctions- a total maniac. Lo, my set was poached at the very last bitty second for a dollar more than my highest bid. Gone. I then remembered why I swore off eBay; I don't have the personality to handle that kind of failure regularly.

In my anger, I just went ahead and purchased the brand new set from Amazon. I then yelled at eBay on my screen "SUCK ON THAT, 9***s!"

I rationalized that these would be investment books. I wanted to share these stories with the kids when they grow up. Like Janssen's mother did for her. I can see all three of my little chickadees curled up by my side on our bed, engrossed in Hogwarts and spells... oh how sweet a picture that is.

So I wait! They are due to arrive on my birthday (next Wednesday, y'all!) and I'm excited.

To prolong this already lengthy post, are you bored yet? I'm sorry... kinda.

During Sunday dinner, Trent was telling us about all the people he saw during the midnight showing on Deathly Hallows 2. It was crazy. One lady was passing out homemade dipped pretzel "wands." (How fun!) He claims he saw some t-shirts with something like "TCU Quidditch Team." Surely this was a guy who got his hands on a T-shirt screener, right? RIGHT?

We found videos on YouTube for the world cup. There were guys! Holding brooms between their legs as they ran! There was a surprising crowd! Before the match there was a fog machine and some kind of "spell!" I laughed so hard I had a headache for the rest of the night.


Here it is for your viewing pleasure; Try to stay in your seat, I dare you.

Oh Harry Potter fans, I may be about to become one of you.

Posted by craftyashley at 10:33 AM
Email ThisBlogThis!Share to TwitterShare to FacebookShare to Pinterest