Do you love house tours? Do you frequent the model homes in your area? Do you just like walking through houses? Well then, you and I are quite similar. I would like to think it's not because I'm nosy, but rather I believe you can learn more about a person through their most intimate of spaces- home. Well, since I seem to be rabidly curious about other's dwellings, it only seems appropriate to share my own. (as I unpack and make it look any sort of camera ready) Let's start with the kitchen! I spend most of my time here... only 2% of that time is spent cooking, however. And of that percent, half of it is spent burning or otherwise ruining meals. 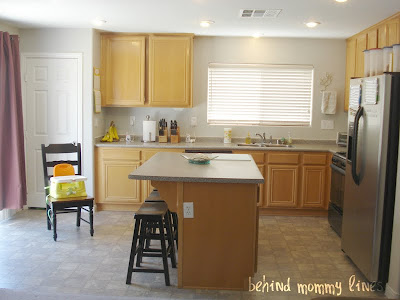 - There is light! Our last kitchen had no windows, and dark cabinetry to boot so it felt like a cave. It was depressing. (I do feel like I have to underscore this with the fact that I am not a fan of the vertical blinds on the sliding glass door over there on your left. The drapes have helped; but I had to hang them kinda high and dorky to avoid Scotty peeing on them, and because I can't remove the blinds entirely as we are... ugh... renting) All the light! and Sunshine! do make this the hottest room in the house during summer.

- I love the big island. The large expanse of space! Our old kitchen had a lovely island, but it also had the sink on top of  it- so that made it less functional- and kind of a pain while washing dishes while trying to avoid splashing icky dishes water onto documents I was also working on.

- It was a tough decision on pinning down what I thought of the linoleum. You may remember I hated my ceramic tile with the fire of a thousand suns, but I was none to jazzed about the prospect of lowly linoleum, either. (hi, I am a snob) Turns out it is ok. The little swiffer wet mops work wonders on an actually flat surface. So at least I can keep it clean- and I guess it could be more hideous.

- See that little door behind the highchair stranded in limbo? That, my dears, is a PANTRY! (I almost spelled that "panty"...  awkward!) I never knew how much a pantry meant to me until I lived in two kitchens without them. I don't care how much cabinetry you have, it just isn't the same as a full fledged pantry.

- Minuscule amounts of cabinetry. I thought this would be a tradeoff, having a pantry vs. a ton of cabinetry from our previous kitchen. NO. Cabinets are just as important. Where do you keep your crock pot for heaven's sake? Not to mention we seem to have unintentionally amassed quite a collection of drinking glasses.

- I just don't like the cabinets in general. I'll tell you a little secret- I was obcessed with my dark walnut cabinetry in our old house. Maybe it is a rent vs. own mentality? (we owned the previous home, we now rent this one) Anyway, I would gently rub oil over my precious cabinets with each change of seasons. They would gleam and shine... they made me proud. These new cabinets have a yellow tone- and have some kind of laquer on the front. I just... yuck. I am still torn about whether or not to install some knobs on those puppies. I don't know why, but it just looks so plain without knobs!

- The dishwasher of all things drives me crazy. It has to be a "compact" model or something. The tiny highchair trays don't even fit in there! I am back to handwashing the trays! GAH! (and other large skillets and woks) It is so small that I end up doing three full loads per day. Loathing!

- A no-brainer: The laminate countertops. They look like granite. Like the lovely granite of my previous kitchen. (gee, I think I really miss my old kitchen!) But do not put hot pots on this counter! They burn! It's a transition to have to remember such things like this. I can't tell you how many times already I've almost put the searing hot pizza stone directly onto the counter. (crossing fingers I avoid burning the countertops while we live here!)


The hub of our home? The kitchen island: 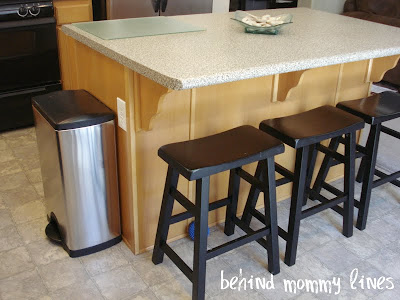 The girls eat their meals, color pictures, and squish play-doh around up there. I sprawl out with the laptop when the kids are napping. Also, this is a picture of the greatest trashcan in history. It was a splurge on my part a really weird idea to splurge on something you throw icky stuff into- but worth every penny as I found out Little Man can't pry it open! No more toddling over and handing me random pieces of trash! (yes, that happened... often) It also does a lot of other nifty things, but how long can I hold your attention while talking about a trash receptacle?

While I am making their meals, (you know intricately crafting meals- not just throwing some frozen chicken nuggets into the toaster oven) the twins play with alphabet rocks on their little stools: 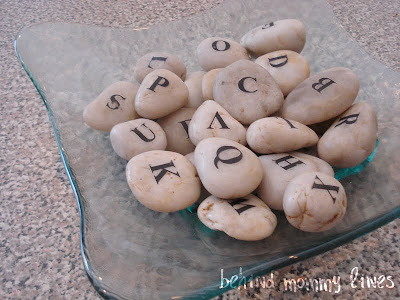 A cute little craft I found here. I love that they are both educational and still look a bit... decorative. It is such a great way to keep the hungries occupied while I throw together some sustenance.

So, there! Kitchen! Eventually I will get around to assembling more of this house and perhaps I will share some it with you. If this is a bad idea, please comment and tell me you don't want to hear me drone on and on about my house. Much appreciated!
Posted by craftyashley at 3:19 PM
Email ThisBlogThis!Share to TwitterShare to FacebookShare to Pinterest