There was a plan

I goosed all of the kids into the car this morning. (is "goosed" a word? It just seems to suit the action so well. I feel like a mother goose honking at the kids to SIT! IN! YOUR! CARSEAT!) There was an express reason for getting out of the house earlier than normal. We were heading to the Uhaul store to pick up packing supplies; Bubbly wrap, squishy peanuts, and roughly twenty pounds of newsprint. 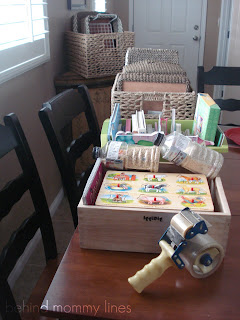 I decided we are starting the packing process today. Yesterday was the pre-packing process. You see? When you plop the word "process"after things you sound so organized! The pre-packing process was a doozie. I went through each and every cabinet and assessed each item it contained, deeming them packable, a necessity we can't do without yet, or tossable. (guess what the majority of items fell under?) Tossable was the big winner of the day. No matter how much I love my stuff, I can usually never wrap my head around physically moving it from one location to another. I'm simply that lazy. And thus, things get thrown in the trash. Good thing today is trash day. The garbage men have their work cut out for them! (they probably already hate me anyway)

I also had a good swift kick in the butt from my inner-hippie. It was deplorable how much food I was throwing away. All the stuff I had stuffed in the back of drawers that I had completely forgotten about, and was not willing to find a place in a box for. The foodstuffs that hit the dumpster were mostly likely enough to feed a decent sized shanty town in Ethiopia. (I would have donated it, but I'm quite sure the Salvation Army would not accept a dozen half eaten, intensely dusty boxes of Fruit Loops... whose "better before" dates range from around the time the Titanic sunk to the time Sex and The City went into syndication)

Don't even get me started on the medications! Why does one need twenty four cold relief tablets? If you can only take them every 6 hours... HOW LONG ARE NORMAL PEOPLE'S COLDS?! I have about five boxes of cold medicine that have ALL expired... like really expired... in February of 2008. Leaving my kitchen cupboards practically bare... aside from the ten boxes of Velveeta Shells & Cheese (it's ok- I get the "whole grain" version) It was time to start the ACTUAL packing process.

I underestimated the actual packing process. The reasons being (a) The twins REALLY want to help... but they do a dreadfully terrible job- really awful- the boxes don't close, they contain a stuffed teddy bear, a colander, and three hand towels... and the baby's binky. (b) The baby is deathly afraid of the noise the packing tape dispenser makes. (to his credit, it is rather loud and startling) It wakes him up during naps, so I am forced to use it during the precious hours he is awake. Thus, the boy screams bloody murder all day. And lastly to (c) We have a lot of crap to pack. 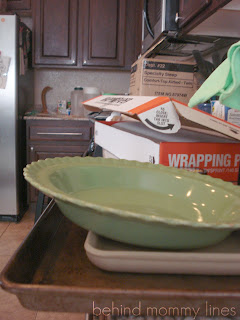 I knew it'd be a hefty job, but sheesh! I put in a couple hours of solid packing while the kids ate lunch, but then I look around and there's so much more left!

The plan was to make a real dent in the progress during this afternoon's naptime. Except somehow I wound up flitting my time away on Facebook, folding some laundry, and watching last Wednesday's primetime lineup that was gathering dust on my DVR. What a gigantic failure.

I suppose the only thing left to do is to stuff my car to the brim of all the oddly sized and/or delicate items I do not wish to pack and shuttling them over to the new house. Just what everybody wants to do on a lovely afternoon! Perhaps now is a good time to take a few toys bins over to the house- at least give the wee ones something to do while Mommy huffs and puffs around with large, heavy objects.

Oh! But amazing news! By some miracle of massive proportions, I was able to come across a solvent that got rid of our little carpet problem! So there's that! Now you all go have a wonderful weekend- I am afraid I must live vicariously, as my weekend will be filled with more packing plus a fun trip to clean out the storage unit. Fun times.
Posted by craftyashley at 2:40 PM
Email ThisBlogThis!Share to TwitterShare to FacebookShare to Pinterest