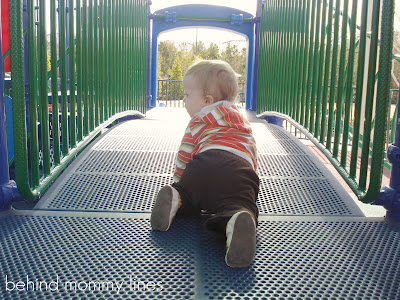 January 2011- Marveling in Little Man's newfound adventurous spirit, along with all the speed crawling. 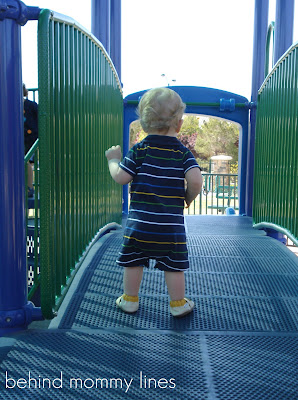 April 2011- Walking! While testing the waters of independence... clearly stating that he's no longer my tiny bundle of baby.
It is times like these when I start frantically searching for life's ever elusive pause button. The babies are growing up too fast! Little Man is smack in the middle of "the cutest age ever" and I just want to munch and swoon over him all day. 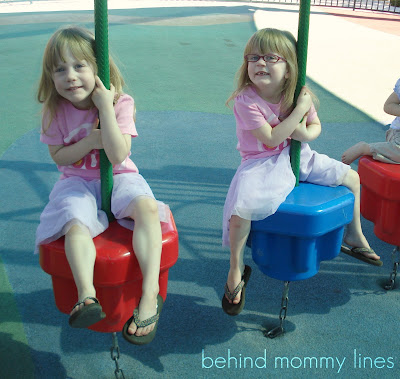 The girls are stepping into their own personalities, their own sense of humor, their own views of the world.
I've been contemplating the preschool thing again. I don't know what is holding me up from making a decision! It has become quite clear that the girls are ready for some space- other relationships outside of our family unit. They need some real friends. They need to see other kids their age on a consistent basis.
I also need a break from all the four year old drama. And the newly emerging twin dynamics that have got me stumped. Are they just fighting because they're tired of being around each other? Are they asserting their own personality likes/dislikes? How do I foster each child's independence so they don't end up completely codependent on each other? Why does the twin thing have to pile on top of all the new four year old issues? That's too many things to have to figure out at one crazy time! Cause if I don't figure it all out now- I am going to ruin them for life! Parenting is a little too much... pressure.
My January girls won't be "of age" for kindergarten in the fall, yet. (even though they are so very ready in my eyes)  I've got another full year of being on my own here. I haven't found a ballet class situation I like- should this be that difficult? I may be over-stressing on the silly ballet class.
I am still up in the air on a preschool- I think I know where I'll put them this fall, but I vacillate on whether it's a good choice or not. The preschools I am really keen on are either extremely cost-prohibitive, or too far a drive for me. Besides, October? That seems like forever and a day away from now! I need at least a patchwork solution before then (they are, as we speak, fighting over who picks up what in the playroom. There's screaming, and scuffling, and some crocodile tears. Seriously, are they going to make me go up there?!)
It's April- and I am going to find something for the girls to do. Swimming? Ballet? Something just shy of part time daycare?! Seriously. I. Need. A. Break!
Posted by craftyashley at 10:38 AM
Email ThisBlogThis!Share to TwitterShare to FacebookShare to Pinterest