Let me preface this rant with these facts:

- Our fridge is brand new. Well, practically. It's three years old- like everything else in our house.
- It hums/clicks/makes weird sounds.
- During my pregnancy with Little Man, the rattle sound it made constantly drove me to the very BRINK OF INSANITY.
- The rattling sound got worse when I attempted to fix it, and broke a plastic hook on the water dispenser cover.
- I remedied the situation with painters tape.
- Then silicone caulk- which helped- but only so much.
- This is not the first time I have cursed this refrigerator's insistence on driving me crazy.

A few weeks ago, I was vacuuming. The vacuuming got a little out of control as I ended up rolling the fridge out of its cubby and vacuuming all the fuzzies and crap behind it. Also, I sucked out all the fuzz from the vents on the back- a job that it seemed like I should have attended to earlier- cause there was a lot of gross stuff going on back there.

That got me thinking. There is a vent on the front, too. That was probably packed with dusty fuzzyness. Perhaps if I gave my fridge some TLC, it would stop trying to ruin my life?
So, with my trusty vacuum attachments at the ready, I pulled off the plastic vent cover. (A job that was surprisingly difficult) And there was no vent, the one I had cleaned out previously on the backside was the vent that sucked in the air and chilled my perishables. This thing on the front was just a big plastic piece to look pretty. Bummer. But ok, fine, moving on.

But, no! Plastic cover refuses to snap back on! Consulting the user's manual was to no avail. It says to open both doors and slide it back on. Literally, there's one sentence and a hastily drawn graphic on this topic. I've used all my strength and might. Nothing. Won't go back on. This issue leads directly to this problem: 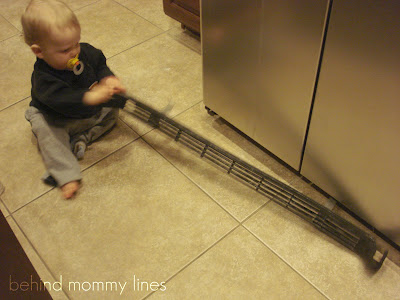 Little Man playing with broken refrigerator equipment- lovely. I am just waiting for the day that someone I know comes over to find the baby dragging this monstrosity around in the background. (can we say white trash?!) Every time I turn my back, he's at it again with the vent cover. I hate you, fridge! I hate you!

One of the major reasons why I haven't completely lost it and made an emotional and ridiculously large purchase like this is the fact that I haven't made up my mind about the whole "counter depth" situation. The space between our fridge and the island is minimal, getting a counter depth fridge would be so nice and make the kitchen look and feel loads bigger. But the storage space inside those counter depth bad boys are (obvs) smaller! Could I live with less refrigerator real estate? And would I pay double for fewer cubic feet? (yes, double the price counter depth fridges are. Crazy, right?)

I'm just praying for the day our current fridge decides to go out balls ablazing and do something to really warrant it's swift replacement. I'm pretty sure this day will never come. It will continue to technically "work." Just to annoy me even further. This fridge has it out for me, dude.
Posted by craftyashley at 9:24 AM
Email ThisBlogThis!Share to TwitterShare to FacebookShare to Pinterest