The Theme of the Day

Today has been brought to you... by being fed up! This feeling of being fed up has led to a few adventures in this day. Let me walk you through it!

- I was fed up with my grimy floors. So I listened to Lacie's advice and set out to Sam's Club in search of the industrial janitor's mop and bucket. I was really hoping it would do the trick, and that my house wouldn't be dirtier than a firehouse.
Ridiculously, they had a mop refill, but not the mop. (good thing I made an entire trip for the mop!) Not to let the trip go to waste, I bought the industrial solvent. Surely my floors would be cleaner than, say, a Taco Bell. I refrained from the floor cleaner/grease remover. It warned against using it near stainless steel. I was worried about that sentence, since I enjoy my pretty, shiny appliances, I didn't get the hydrochloric acid in a bottle.

- I was also tired of buying ridiculously tiny cans of super expensive formula for Little Man. Since we have started 'solids,' Little Man has not had a problem. I was sure that if he had this protein sensitivity, then the rice & oatmeal cereal would light his skin on fire. It has not.
The gigantic can of generic formula at the warehouse store was simply too tempting. It was practically taunting me from the shelf! More than double the amount of formula for $15 less? I couldn't resist. We're going to try normal formula again. I'm equipped with the proper ointment in case this patchwork plan falls apart. 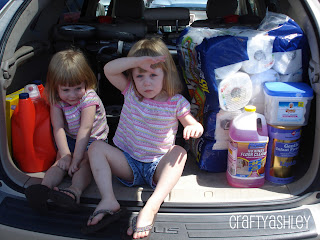 (snagged two adorable girls- two for one sale!)
- I am also fed up with parents who buy these: 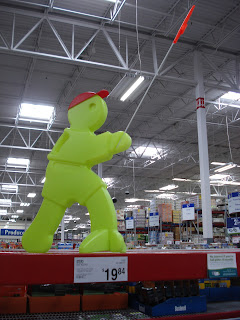 Seriously. I've seen them placed in the middle of the road. Forcing me to drive around these neon yellow affronts to nature. Really, paranoid parents? Excuse me for driving on a road. Were roads designed for your children to play in? Or were they built for cars (like mine) to drive on?
I'm driving at the speed limit. No, I will not go any slower. How about you get your kid out of the road? Or teach them proper procedure for avoiding getting hit by a car? I know it's harsh. But really. I have kids now, I am responsible for their safety. However, I do not feel the need to take away or impede other's rights at the same time. I teach my kids not to play in roads! To look both ways before crossing! To generally avoid situations in where they will become injured by fast moving vehicles. It's just good parenting!
(having a husband who drives a truck for a living, I have heard tales of super-annoying parents telling him "slow down!" while he's going quite a bit under the speed limit in the first place. Those are the people that need a smack in the face. Just saying)

- I am fed up with the consumerist, materialistic little tyrant that runs my control panel, the one who is easily swayed by clever marketing and attractive packaging. Because for half a nanosecond, I thought about purchasing this

, the Shark "Deluxe" Steam mop, displayed smartly on the warehouse shelf.  It's new! It has a bristly purple pad now!
Curse you, Shark marketing people! You can't just add a fluffy purple sponge and trick me into a bad mop again! I hated your product! (Thankfully, this fleeting moment passed, and I walked away- however, I have read reviews on the "Deluxe" and it is sounding appealing. There is currently a large scale conflict going on in my head right now. Anti-Shark team is winning- but only by a hair)

- I am fed up with being the only person on this planet who has not tried the Magic Eraser. I remedied this problem (product review pending) and bought a 10 pack.
Posted by craftyashley at 3:09 PM
Email ThisBlogThis!Share to TwitterShare to FacebookShare to Pinterest