I am most likely going to gross you out with tales of my sticky, icky floors. I have had floor problems ever since I combined the licking force of a nervous and anxious dog with the food flinging fury of small children. Here's what happens:

I make food, sometimes it falls off the counter and into the jaws of the dog that is hovering at my ankles. The twins drop food off the table, splash their sippies all over the place. And the baby? Well... there is flake cereal everywhere. On every surface.

So the dogs lick the floor. They lick up every molecule that touches the floor.
Sometimes I think they lick just because they like it. Like a nervous tick. The girls are darting around the house and screaming? Throwing toys? Let's go lick the floor. That'll fix things. 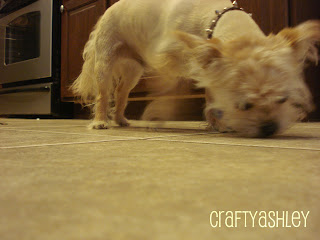 All this wear, food, and dog saliva makes for a very gross floor indeed. Some parts are more sticky than others, there's a general black-ish tint to the parts directly under the counters. It is, quite possibly, the bane of my existence. Does a normal mop do the job? Of course not! Regular mops are absolutely useless!
I keep a Swiffer Wet Jet waiting in the wings for blatant messes, like potty accidents, dropping of juice boxes, the big stuff. But even that sucks, because it just pushes the stuff into the valleys of the grout lines. My grout? The stuff that used to be a nice, neutral beige? They're black now.

The only way to really get the floor clean is pour a bunch of vinegar on it and scrub the crap out the tile/grout with a stiff brush. Then you have to carefully mop up the dirty vinegar away from the grout lines with a large towel. In no version of any universe do I have the capacity to do this to the entire downstairs. It is so time and resource consuming. Not to mention that vinegar- have you smelled vinegar? It's not a great smell.
I've been on the hunt for various mops and potions for about three years.

I started off with a steamer. The Shark Steam Mop

. I wanted the cool Bissell one

, but I would have had to order that. At the time, I was rabid in my desire for a clean floor. Since Target had the Shark, I bought the Shark. I didn't like it. The pads got dirty too quick, it wasn't picking up the licking slime. (ewww. Never eat food off my floors... ever.) It was a step above the toweling, though. When I scrubbed, it picked up the dirty vinegar nicely. So it helped with half the job. I was nonplussed with that kind of result. Especially after sinking so much money into it. And... to really give me a proper kick in the pants, after a couple months I tried to use it again. And it wouldn't work entirely. How much do I hate that Shark Mop? It's a lot.

I stalled out there for a while, floor cleaning technology wasn't impressing me. I was running out of options. Until last week. I was rummaging around the aisles of Target- which happens at least once a week. And I happened upon the Magic Eraser Mop

. I have heard the Magic Eraser's fabled "magic" far and wide from parents. Some people rave on and on about it, in fact! It's just a sponge, people. It can only be so awesome. But I picked it up. I even bought two refills


Before we continue, I would like you to view this side of the packaging: 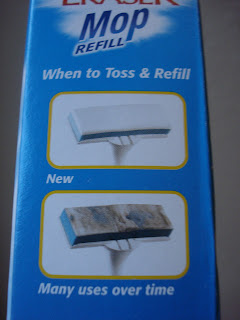 Especially pay attention to the caption under the dirty mop, an example of "many uses over time."
After only mopping the dining room, (which is anything but expansive) my brand new pad looked worse than that. I finished the downstairs with the same pad anyway. I was determined. So, not a fan of the Magic Eraser mop, either. I'm tempted to buy a regular Magic Eraser just to see what all the fuss is about. Hopefully it is better than the mop-version. Or else those Magic Eraser followers are delusional.
So the search continues! Any ideas, readers? Am I the only one with these particular flooring problems? I swear they don't look that dirty!
Posted by craftyashley at 6:05 PM
Email ThisBlogThis!Share to TwitterShare to FacebookShare to Pinterest