Let me preface this by stating- I love my kids. They are, in general, quite well behaved little sweethearts. They do, however, have a penchant for sassing and disobeying. (and whopping each other on the head) Sheesh, my two girls have become quite mouthy indeed. Indignant even.

I am getting downright tired and fed up with this behavior. (as you can imagine) Especially taking into consideration they started up with the sass before they even hit the terrible twos. I don't know how we've made it thus far. The sass is just... it's been going on for so long!  It seems as though I have tried everything. Every parenting strategy known to man. I wasn't going to be the "spanking mom." Rookie mistake. New moms always have these intense ideas about the things they'd never do as parents. (all of which made with little to no actual experience with a kid in the mix) Most of them end up doing all those things and more. We did positive reinforcement, time outs, bribery, and eventually spanks too. Each one of these approaches had its own set of pros and cons. And were usually only accompanied by varying success rates.

I had seen this jar method in various parenting magazines, books, and I'd even seen it implemented in a friend's home. (I just noticed the jar- I should have asked how it was going) In my reading, it was used for things like chores, but I was hoping it could work on a broader just-do-what-I-say spectrum. The basic idea is to have a jar in which good behavior is rewarded by placing a token in the jar, in hopes of filling the jar with good deeds to earn a larger reward down the road. The flip side is, naughty behavior means a token comes out of the jar, thus extending the time it takes to obtain said reward.

So while at IKEA, drooling over large items I could not manage to drag back home with me, I spotted these huge glass jars for under four bucks. I figured that an investment of eight dollars was worth my sanity- and they were reasonably small enough to ask my parents to pack home with them in their car. (The same could not be said for the Expedit bookcase) I did not find any suitable "pretties" at IKEA to go into the jars. Michael's back home had a multitude of options. I was hoping to use the sparkly pom pom balls, but no sparkles were in stock. So I bought a mixture of shiny vase filler pebbles and lucite cut gems. I had to buy a ton of them because I had purchased rather large jars. This decision was made after the girls had a minor meltdown in the IKEA and I was hell bent on making sure that they earned the crap out of this big reward. $25 dollars in "pretties" later, we were ready to go. 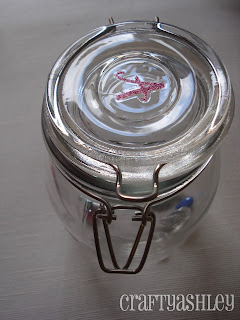 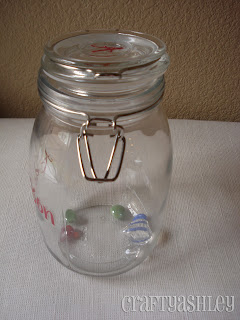 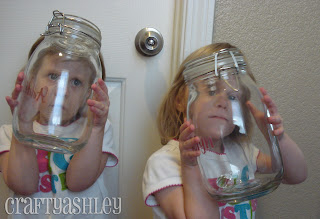 The Verdict:
So far, so good! The girls are supremely interested in the pretties. They will do pretty much anything for a pretty to make its way into their jars. Go take a nap, pick up toys, eat their meal, share toys, etc. The threat of removing a pretty is a handy little ace in my back pocket. The other night, the girls were fighting over a toy and one of them smacked the other one on the arm. I swiftly sprang into action and plucked a pretty right out of the offender's jar. The consequences were certainly felt. We can only hope it was a lesson learned. 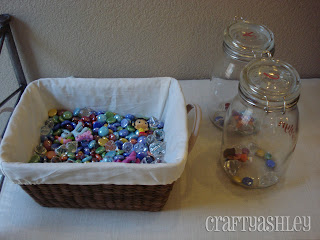 The downside is that they are constantly pestering me for pretties. Oftentimes I will look around and tell them what they could do to earn a pretty. I'm thinking this may get old fast. (especially after saying, "ok- go play with some toys... and then clean them up. Then you can have a pretty for your jar")
Also? Removing a pretty for a naughty deed is a long, drawn out, loud process. The girls will cry for a while- with ample theatrics. But really, they have to learn. There are consequences to bad behavior. They need to start thinking about what they are doing and what will happen as a result of their actions.

This parenting racket sure is hard!
Posted by craftyashley at 7:14 AM
Email ThisBlogThis!Share to TwitterShare to FacebookShare to Pinterest