More Than A Snip 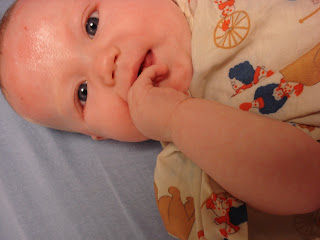 We're back from the ridiculous gauntlet that was our hospital experience with Little Man. Things did not go as I'd planned in the least bit. But to soothe your worries- the surgery went off without a hitch, and the doctor said he did great.

Do you see that picture up there? That is my child. Suffering from a serious flare up of his eczema, and had not eaten in over twelve hours. Yet he still smiled. He flirted with any nurse who would flash him a grin. He was heaven in the creepy clown hospital gown.

I don't know why they make you come in so early to just sit and wait in the screened pre-op room. The kid had not been able to eat! And we were supposed to... sit there? Any other child would have been screaming and making a scene. Luckily, I have the most chill baby on the planet. So that was nice.

He eventually went back to the OR. I sat in the waiting room with my Mom. I'm so glad she was there- because I was on the verge of a mental breakdown. I'm sure I'm not alone in my dislike of being in a hospital- it's no fun for no body. The surgeon had casually said that the surgery may be more in-depth if his urethra (pee spout) was too narrow and she'd had to fix that. I would be waiting for hours as everyone else was called back from the waiting plaza to visit their loved one. I was a disaster.

Unfortunately, after I was let in to see him in recovery we found out that the poor Little Man had received a genetic gift from myself- the inability to tolerate anesthesia well. Seeing your four month old child dry-heaving is not pleasant. It's heart wrenching.

Also- a hospital is the exact place to find the crazies. My motto? Don't talk to random strangers unless forced to do so. There is a large chance you find this "stranger" to be a strong blend of crazy in a can.
One of the multitude of nurses was just one of these crazies- extolling the benefits of "homeopathic" doctors. Seriously, she would not stop talking about some kook doctor that "read her meridians" and diagnosed her from a bracelet he tied around her wrist. To top it all off, Nurse Crazy was not nice to my baby when taking out the IV. I could have done worlds better- with absolutely no medical training. My poor little boy.

Now we're home. I am under doctor's instructions to stab diapers with a knife to create a hole for a fanatically fun double diaper system. Stabbing diapers. With a knife. Sounds normal, yes?

My nerves are so raw. Rollercoaster day, indeed. Now is the time for pampering a recovering Little Man and trying to not cry, further proving to my son that his mom is a blubbering dolt. This is exactly like the nurse predicted: harder on me than on him.
Posted by craftyashley at 3:14 PM
Email ThisBlogThis!Share to TwitterShare to FacebookShare to Pinterest