More Proof I Need a Maid

So things have really deteriorated around here. Little Man is still recovering, and I think the stress is going to kill me. He's no grumpier than normal, but whenever he even lets out a peep I think it's because he's in pain... or bleeding out... or something else equally horrific.

And then I noticed the twins were starting to come down with something. And that something hit me too... hard. Our entire house looks like the surface of Mars- we're not quite sure if there are any life forms or not. Like the surface of Mars, but add in about a billion random toys to the landscape. There. That's the picture.

While trying to locate a (still MIA) sippie cup, I crouched on the floor to peer under the couches and saw this under the bench: 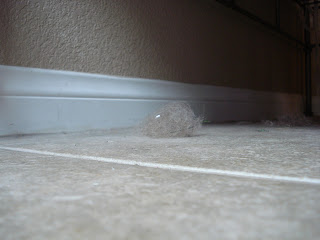 Like a tumbleweed; but made of dust, hair, and paper specks. In. My. House.
(and this is not the only one, I'd wager)
This is a good reason to move, right? Start off with a clean slate? The house has reached a level to which I'm not entirely sure I could even pay someone to come clean it without feeling guilty of letting another human witness the atrocities that are my house.
I am just imaging our sweet little cleaning lady (we've had her over a few times) trying to hide the horror, the abject terror, the unadulterated disgust upon seeing the state of things over here. This is where robots may become handy. Yes. I need a ROBOT MAID!
Posted by craftyashley at 7:33 PM
Email ThisBlogThis!Share to TwitterShare to FacebookShare to Pinterest