I may be a hippie. But at least I'm not a dirty hippie. Even I rolled my eyes at homemade laundry detergent. I mean, c'mon! (source: SouleMama) But the idea grew on me.

I've used vinegar as my cleaning agent for a long time. It's the only thing that will make my floors scum-free, and it works wonders in place of traditional fabric softener. (especially for the crazy hard water we have out here)

This homemade detergent idea wouldn't get out of my brain! The husband scoffed, "I guess it's only more work for you!" (and that made me want to do it more- now I had something to prove)

So here's my big hippie experiment: 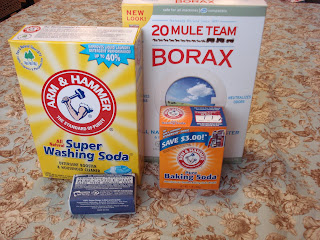 Ingredients:
2 c. finely grated castile soap
(Dr. Bronner's Peppermint)
1 c. Borax
1 c. Baking Soda
1 c. Washing Soda
I got most of it at Smith's. (Target was severely unhelpful in this regard- minus one star for Target) The only thing I "splurged" on was the soap- that I found at Whole Foods- but it was on sale for $2.99. The idea of having my laundry smell like peppermint was worth the trip. 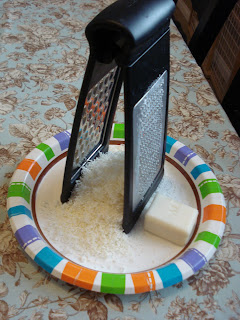 Grating soap? Thought it would be harder. It was relatively easy. It says half a bar makes 2 cups of shred, so I doubled the recipe and grated the whole bar. 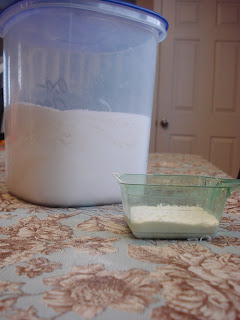 The end result. Use 1/8 c. in a normal load (1 oz. for those of you like me that had to look that up) Luckily, I had an extra measured detergent scoop on hand- it was super random. So I figure I can do quite a few loads with this little batch. And the batch I made cost:

So far my only complaint is that the soap doesn't mix well with the other ingredients. It's kind of a hassle to make sure it's evenly distributed.
Posted by craftyashley at 2:40 PM
Email ThisBlogThis!Share to TwitterShare to FacebookShare to Pinterest