What I like to call "The Feeding Situation" with our kids has been in flux ever since the twins were born. When we were starting solid foods I was at a loss. We had two swings, two bouncers, a large puppy pen, and an excersaucer crammed into the small and chopped up space of our old house. Walking around downstairs was like navigating through a maze. (there were times when you needed to be folded in half and on your tippy toes) Our dining set was in a carpeted area, so that was out. We thought the cheapest option, and the one that made the most sense would be chairs that strapped to our big chairs. Like this one. But that meant I had to drag two dining chairs for the seats into our tiny breakfast area, and yet another chair for me to sit on and feed them. So we had this awkward three-chair-arrangement in our house- and it looked weird. So when we moved, we sent the "feeding chairs" to my mom. I just plain didn't like them. Out of the box, they looked chintzy and cheap. And they weren't easily operable. I was glad to see them gone.

When we moved into our new house, (the twins were 8 mos. Yes, I know! Moving with twin babies was... hard. So hard. I don't recommend it) We splurged and bought a nicer-model full-on highchair. The Chicco Polly came highly recommended. It was pricey (when you buy for two, everything becomes pricey) but it had a lot of features like the two dishwasher safe trays. Awesome- I can wash one, and have a clean one. I was over the moon as we brought this large purchase home and assembled them. In the new house, we had a large bar area, so instead of bar stools, we just had the chairs backed up to the bar. (pictures are here) It worked well, I didn't have to leave a chair for myself, I could stand, or the dining room is right next to the kitchen, tiled, and I could just pull one up and put it right back. Seemed to work out great.

... until I tried to put the trays in the dishwasher. Not happening. Those trays were twice the size of my humble  (totally empty) dishwasher. One could never fit in there, much less two. I was mad about this. I shook my fist in the air. But I moved on. A couple months later, I noticed the highchairs needed a good cleaning.

Three hours later, I had highchair parts strewn about the house and the backyard. I was squeezing my little hands into tiny, tiny places that hands should not usually fit into. There were so many crevasses, so many minute places that food gunk got stuck. It was crazy. I did that every three months, begrudgingly.

About a month ago, the girls started complaining about an "owie." Turns out the cushions had cracked in numerous areas and were scratching the girls while they ate. I was furious. They were barely two years old. I was so consumed with rage, I sent out a sharp letter to the manufacturer, and planned out the replacements of the highchairs. (To Chicco's credit, they kindly sent replacement cushions for free, but because of the reasons above I was done with these highchairs and sold them, with the replacement covers, on craigslist)

I found a great review for feeding seats on one of my absolute fav blogs, Style Lush. The whole thing can be shoved in the dishwasher? THE WHOLE THING?! Sign me up. Sold. Yes. Chicco was out. Fisher Price was in. And now that I had a dining room table over tile, I was sure the girls would be thrilled to sit at the table and feast! (Only problem is, we don't normally sit at the table to eat any meals. We're couch eaters. So I had to first clean off the table- which was the catch all for downstairs junkery, and that involved new storage systems, furniture re-arrangement, and artwork shuffling- big. freaking. job.)

So that was great. But then I started to worry about my new dining room table- a housewarming gift from my parents, and one of my very favorite pieces of furniture ever. It has a gorgeous wood top. And I would just die if anything happened to it. (You can see the crazy here) So I scoured the internet and came upon the Piggy Platter. I wanted something more than just a placemat- because stuff spilled, and would totally migrate from placemat to prized wood table. It was a little expensive for a glorified placemat, but still. Ordered. Shipped. Done. 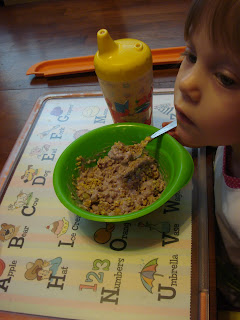 So far, I like the Piggy Platter. It has a raised lip for spillage, it comes with a fun alphabet page to go under the plexi-glass top, and it has a rubber catcher. The catcher comes off easily, so the kids usually take it off. (you can see it on the side there) But it isn't really big enough to contain a three year old mess. I do have to wipe the table occasionally. But things are working out ok! Best part? IT FITS INTO MY DISHWASHER. This makes my world all bright and magical.

I got stools for under the bar- and it is now my very own command center! I cannot believe I lived without this little spot for so long! 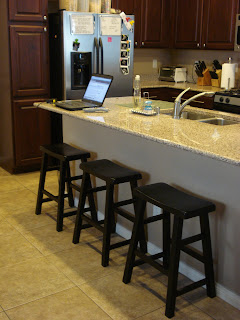 I am sitting right there at the end stool as we speak. Most of the time I have a plate of snacks, the TV remote, my cell phone, and a Diet Coke right next to me. It's perfection. My own little heaven. And when I'm cooking and need a recipe online? Bam! Right there! I just have to be super-careful not to get the counter all wet, thus killing my beloved computer. But anyway, it's great. I love stools. Stools are my new best friends. I can also sit the girls at the bar while they play with playdoh or other messy, bar-confined activities. 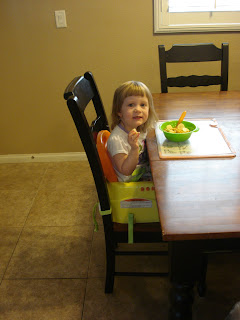 And the new feeding chairs

? They're working great. They're so much easier to clean- I am kicking myself for being so miserable with my old highchairs for so long! For twenty bucks a pop, I bought three! Two for the twins, and one for the baby when he grows up (which will be never- he's staying my baby forever!) 'cause it comes with a baby tray too! I've even thrown the whole assembly into the dishwasher. DISHWASHER! DISHWASHER! LOVE LOVE LOVE!
Posted by craftyashley at 10:27 AM
Email ThisBlogThis!Share to TwitterShare to FacebookShare to Pinterest