I've been meaning to do one of these for reasons unknown even to myself! Especially since my life is totally and completely boring... this is probably the last thing I should be entertaining you with. It's like arriving to a circus and me bringing out a bug I just caught in a jar. Woohoo, everybody! Look at this!

Sorry, but here is my humdrum morning. (It was much more frantic and chaotic than appears on camera, I swear) 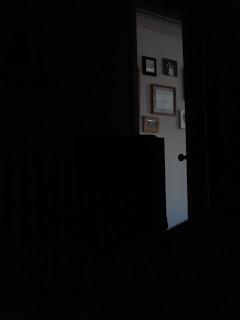 This is pretty much what I see every morning. I wobble into the nursery for little man's 4-5am feeding and then pretty much pass out on the bed in there. This helps as I avoid having to hear the husband's alarm go off at 6am and his very loud bumbling around. He opens the door when the girls wake up and take them downstairs to play/watch TV while he gets ready for work. We've established he can't come physically wake me up or else I start swinging... with my fists... (my friend sleep and I are not easily separated) 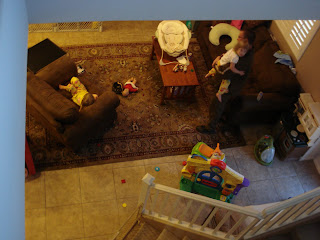 I usually come downstairs as the husband is going out the door. The girls insist on a hug and kiss before his departure... then they start on me with the requests. New show! Juice sippies! Breakfast! (My head spins each and every morning as I pad around in the kitchen) 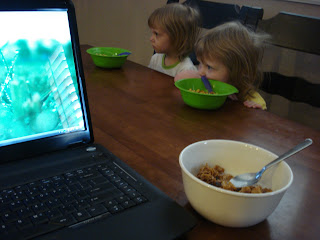 I surf the web and check email in the morning. (sometimes I eat too! This was a rare morning) Usually accompanied by the sounds of Curious George wafting in from the living room. As you can tell, the girls are totally focused on eating breakfast, and not at all distracted by George's crazy hijinks. 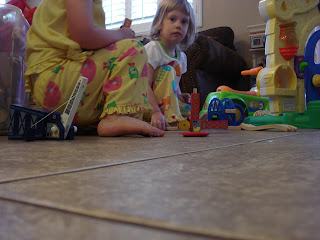 Then I set the girls up with toys because it is bordering on 9am. That is when the baby gets up and has his breakfast... and mommy tries to take a shower. I'm emphasizing the word tries in tries to take a shower. Because only today it was "mandatory!" I had two doctor's appointments in one week. This was nearly catastrophic as I had to look like a non-homeless person twice! In one week! 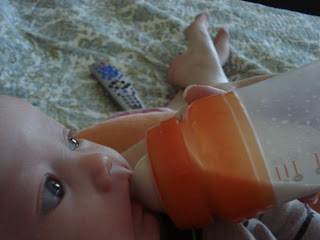 But there's always that little break I have to take- no matter how much I'm rushing. It's probably good for my blood pressure- but it sure makes things way more frantic after we're done! 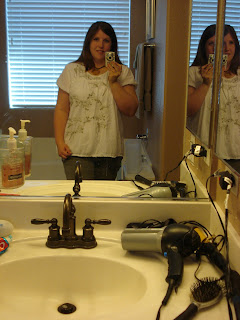 And I took this picture to document that it does happen! I can look semi-decent and put together! (even if I have a dopey taking-a-picture-of-myself-smile on) 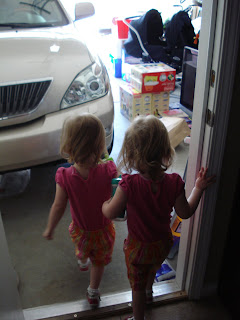 Now it's time to GO GO GO! There are no pictures of getting the girls ready. It required three hands- and I only own two hands- so you can see how this was a bit, problematic... 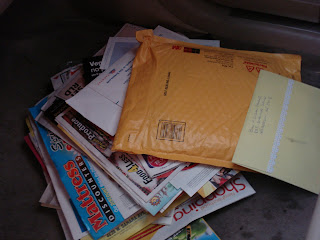 Now grab the mail that we probably should check more often and throw it on the floor! 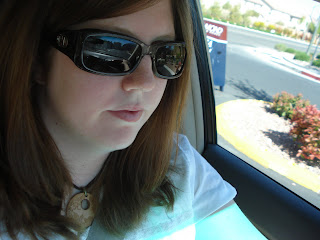 Now try and look calm again! For crying out loud! You can't look like a maniac all of the time! Besides, aren't you glad we all just got out the door? 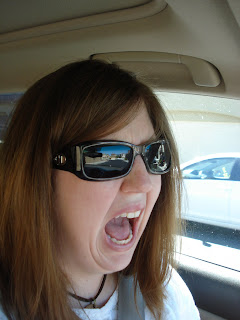 ...and forgot the address for the surgeon's office? The surgeon who will slice and dice you? Shouldn't you be on time for that meeting? And thus require the address?! (as opposed to generally knowing where it is)
Posted by craftyashley at 4:18 PM
Email ThisBlogThis!Share to TwitterShare to FacebookShare to Pinterest