Do not... do not expect to snap adorable twin dancing after decking the twins out in a tule tutu in all it's glory. There will be two blurs. That's all you get. It's sad, but true. 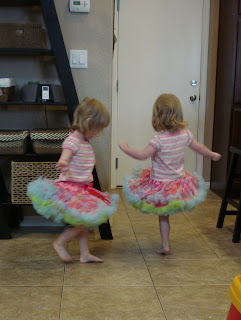 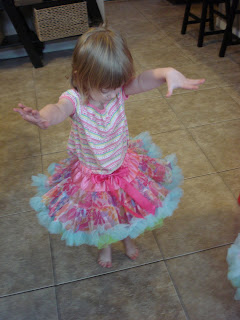 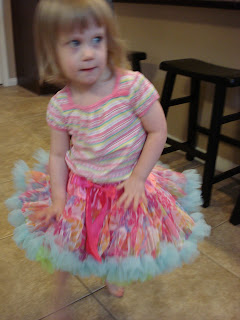 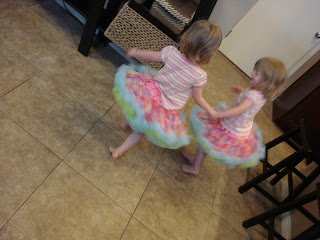 And on a slightly related note... who lets me walk around with money available at my disposal?! What happened to spend-thrift-Ashley or tight-purse-strings-Ashley? I think she's been kidnapped and replaced with ooooh-shiny-let's-buy-it-Ashley. Cause no force of heaven or hell could have kept me from purchasing those floral tutus. Nothing. They were going to be mine. I was going to take pictures. It was just going to happen.

But really, I was forced to! I had a return at Nordstroms. And let me tell you- for a luxury brand store- that stuff if crap! Yeah sure, I'll deck out my kid in those ugly Ed Hardy shirts so he can look like a tool. (a la Jon Gosselin) And I know the 80's are "back," but why does that have to include some of the most unfortunate of 80's fashion brought back to life in children's clothes? My nostalgia only goes so far. Anything past that is just dog ugly... like pug dog ugly. (shudder)
Those tutus (and another set of dresses) were the only thing in the whole store I was willing to dress my child in! It wasn't even a matter of money! I just wouldn't buy anything that unstylish for my poor, unsuspecting children!
Posted by craftyashley at 5:23 PM
Email ThisBlogThis!Share to TwitterShare to FacebookShare to Pinterest