For the maiden voyage of the triple stroller! (you know, to break against the side of say... a boat! Not to get sloppy drunk... although after that trip getting a little tipsy does have a certain appeal)


I needed to make a trip to the mall. (I haven't been in a mall for what seems like ages!) I got what I'm affectionately calling "the bus" all ready this morning. Whipped out the instructions, and deftly maneuvered it into the car. The wheels and frame go in the back, along with two of the seats, occupying every square inch of cargo space. The last seat goes in the passenger's chair. And I was done. Put the instructions back in the house (remember this- it will be important later on) and got ready for a big outing... on the strip... to a real mall... where I had to look somewhat presentable...

We were in elevators (or alligators as the girls call them) for the majority of our trip... why do malls have so many stairs?! But it was more or less successful. I found it hilarious how strangers would ask if I had triplets, and then breathe a sigh of relief that it was only twins and a baby. Only. 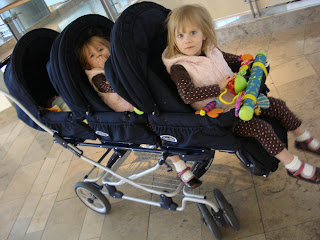 Waiting for yet another "alligator." 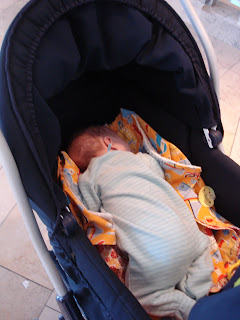 My sleepy shopper.
It was eventually time to pack up and head home. (with my dignity still hanging by a thread) The parking situation had degenerated to the point of cars stalking exiting shoppers to their spot to usurp the space. This is what happened to me too. A nice little white sedan parked behind me, blinker on... I strapped all three kids in, un-clicked the seats, and then stared at the frame. I had absolutely no idea how to fold it up again! It was all folded in the garage already when I loaded it in the car! Those instructions sitting on the dining room table sure would have come in handy about now! I literally spent twenty minutes pushing, pulling, snapping, etc. Desperately trying to get that frame to a point where it would fit into the car! Did the little car just move on? NO! Sat there! The whole time! (she turned out to be a very nice old lady with a lot of eye makeup smoking a cigarette like it was her air supply who had all the time in the world and even commended me for finally getting all my kidery into the car) But people, it was stressful! I was so embarrassed, I wanted to die. Right there.

Moving on! Due to the unholy madness that has been our household, a blessing outfit kind of slipped through the cracks. I was super nervous about ordering my favorite and by some mail mishap, completely missing the perfect outfit on the scheduled day. So I hit the stores. My efforts (and sheer force of will) yielded three options, and I need you to vote on them. Brace yourselves: they are super casual. (just remember who's shopping here- miss overly-casual-in-all-situations herself) 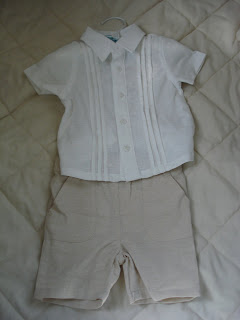 My favorite of the three- but I'm worried about the casual-factor. And it's the cheapest. I think the idea I'm clinging to is this being an "heirloom" piece. None of these qualify for that, I don't think. 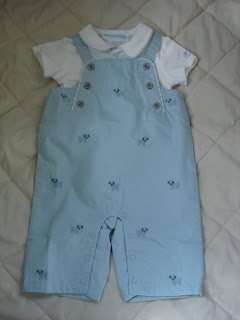 I'm a big fan of buttons. This was my original choice, but living in Vegas makes that a suit for roasting a child in during March. This blue number has the same idea... but different. 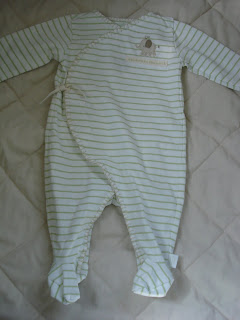 It's organic! (I'm still not sure if I'm sold on this "organic" idea. Seems horribly gimmicky to me)
And I like that it says "welcome to the world" under the cute elephant. And I like the tie on the side, and the stitching.
Posted by craftyashley at 1:24 PM
Email ThisBlogThis!Share to TwitterShare to FacebookShare to Pinterest