The Big Screw Up 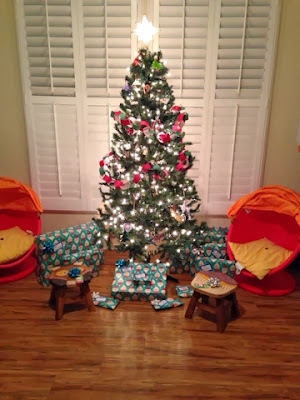 It may not look like much, but after too long lone-wolf parenting, and a very late Christmas Eve dinner, wrapping all this while very very tired seemed like quite an accomplishment.

I struggle with this season, this time of year. (Perhaps you have noticed?) I am 65% more crotchety. It's just so much pressure, too many expectations. The Husband is mostly absent, absorbed in his busy season, and I am supposed to juggle all the normal stuff, plus the getting "Christmas" together, and BE HAPPY at the same time? It's an effort.

Nonetheless Christmas was lovely. For the millisecond that it felt like it happened. Like a blink of an eye, then done. But this isn't about all the whining and miserable kid behavior that followed the onslaught of gifts, sweets, and unfettered fun. This is about how I almost crushed the dreams of two darling girls.

Let's peddle backward if we can. Remember how the girls had asked for a Glow Pet for Christmas? Sure, they were asking the two Santas we saw for the Glow Pet. I was still unsure if that's what they "really" wanted, or just the first thing they latched on to. Like the Glow Pet was the term now ascribed to just Any Toy We Would Want. Should I explain? Last year, out of thin air, and rather close to Christmas morning, the girls up and started asking for a dollhouse for Christmas. The purchasing had already been done, but I moved heaven and earth to get a dollhouse under the tree, at a bit of an expense as well. Come the big morning, and they are pleased about the dollhouse, perhaps just to SEE IT. They play with all the other toys, and kind of leave the dollhouse alone. In the past year, they have played with it a couple times. Little Man gets more mileage out of that dollhouse.

Here is where you understand where I'm coming from. You are on my side, in case you are wondering. You understand and are given all the knowledge of previous attempts at nailing Christmas Morning.

This year I ignored the Glow Pet thing. I was getting them what I considered some pretty spectacular stuff. Surely they would open those presents and be so overcome with joy and excitement that the Glow Pets would be erased from everyone's minds. After all, in comparison, who would want some crummy old stuffed animal with an led light after seeing the treasure trove under the tree?

As we sat down to open gifts one of them leaned over and whispered "I'm so excited to get my Glow Pet." 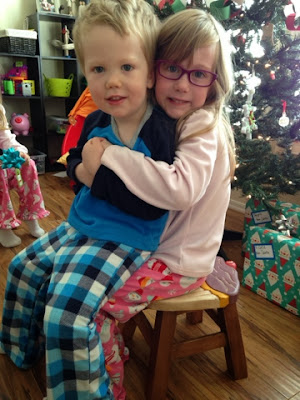 Before opening anything, flush with excitement and warm feelings. Look at the hugging! I didn't even know that was POSSIBLE.

We tore through all the gifts. And while they smiled and acted duly excited about the contents, at the end, in a flurry of wrapping paper Squirt looked up with big eyes and asked us, the onlooking parents (and grandparents) "Santa didn't bring me a Glow Pet?" She may have even questioned how good she had been all year.

Remember, you are on my side. You couldn't have seen this coming either, I assure you. At the very least it was a 50/50 gamble. At least give me that.

I whipped around and whispered to my Mom "What do we DO?!" There was no Glow Pet.
My Mom, equally as freaked out explained to me that after we left Christmas Eve dinner, they had gone out on a hunt for a Glow Pet on the sly, just in case. Sadly however, the only place open was a pharmacy, and they were out of Glow Pets per se. They had exactly two Hello Kitty Dream Lites. Would that be an acceptable substitution? I wasn't sure. Clearly the magnitude of Glow Pet wanting had been out of my grasp for a while now. All of my confidence in these kinds of matters had been shattered.

However! The missing glow pets were dismissed easy enough and I crossed my fingers that we could ride out the storm with only minor injuries.

It was not to be, as later in the day as we drove over to my parents house for Gift Unwrapping: Round Two, the girls, almost tearfully explained to their Uncle that Santa had stiffed them on the glow pets. And what did that mean, exactly? Were they no longer loved as children? Did they get something lower than coal? Just nothing? (again, I'd like to point out, none of that is true, especially the thing about the gifts, man. THEY GOT STUFF!)

We arrived to the Grandparent's home in a sad state indeed. I had tried to explain in the car that maybe, just maybe Santa's elves didn't know how to make Glow Pets. Perhaps we were supposed to go to the store the next day and pick out Glow Pets for ourselves? (Squirt burst in tears claiming I was "being mean" It was a spectacular FAIL on my part, epic really) So we arrived and Grandma & Papa had two special gifts out and ready for the girls (the hello kitty light up ones) and for a minute I heard the girls rejoice GLOW PETS! For a second there I thought we had won and it was all over.

It was not over.

My Mom pulled me into a corner and explained how badly they both felt about the situation, and that my Dad had insisted they scour the valley again for what I am now going to call The Contraband. But of course, on Christmas Day, everything was closed. So they had ordered them online, Overnight Shipping.

There was a cute little scroll outlining that Santa's workshop had had a little accident and that Glow Pets were on the way in a few days.

The girls now surmised that Hello Kitties were not Glow Pets. (They're still pretty freaking cool, everyone including myself agrees on that- I kinda want one for myself to be honest)

The Contraband is scheduled to be delivered today. We're waiting. And heaven can only guess as to how this will all go. The saga continues. I may or may not have my faculties about me to report back. We'll see.

Meanwhile, here are some pictures of Little Man, who had a delightfully Batman-themed Christmas: 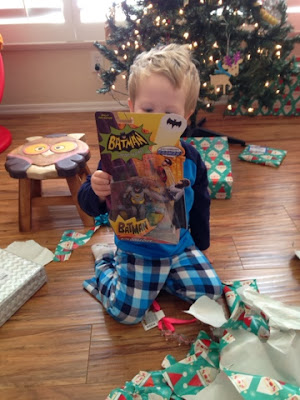 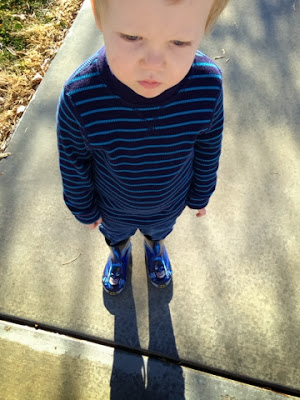 He has no complaints- other than Mommy takes too many pictures of his rocking Batman boots.


So, fellow parents. Learn from my folly. BUY THE DARN GLOW PETS.

Posted by craftyashley at 1:44 PM
Email ThisBlogThis!Share to TwitterShare to FacebookShare to Pinterest