So the pessimism around here! I'm sorry for it! But I still have so much stuff to whine about. Let's compromise, internet. I'm going to squint really hard and find the silver linings this week. I even have my glasses on, and I'm getting a ton of wrinkles from all this squinting.

Side note: I'm currently fighting with Peaches over MY OWN LAP. She is being very wealsley about where exactly she NEEDS to sit. I just need maybe half a thigh to perch my laptop on? Pretty please, dog.

Ok- let's get this started.

Sunny side up stuff:

- That sherpa lined hoodie I bought for Little Man last week? It arrived AND I AM IN LOVE. I want it for myself. So I can rub it all over my face. I would like sheets made of sherpa. (dare I google that?) Because I was having a crappy day yesterday and due to my penchant for retail therapy, I decided the girls each needed a sherpa hoodie, too. The Husband disagrees. He thinks four jackets per girl is enough. HE IS SO OBVIOUSLY WRONG. Because this one has SHERPA, my new favorite word/soft fuzzy thing. I bought them while he wasn't looking. Let's see how long it takes him to (a) notice them and (b) give me his Look of Disapproval.

- Scotty has not pooped in the house for two whole days now! He threw up a lot last night in the laundry room. But honestly, I think he just did that because he was freaked out about being quarantined in the laundry room. The laundry room which is 8x larger than his pen, had his own water bowl, pee pad, and extra blankets because I took pity on his sad dog eyes. See, on paper the laundry room confinement was a great deal, SCOTTY.  Perhaps he missed his extra heating pad named Peaches? Whatever. I'm chalking the barf up to anxiety and calling him cured. For now. Congratulations on your clean bill of health, as written by me, Scots.

- Even though I had a migraine last night and felt like chewed up ground beef this morning, I made an effort and took Little Man to the park for super-duper-extra-long scootering. I can never seem to get it through my thick, luxuriously long golden locks covered skull that if I just exert myself a TEENY ITTY BIT, like taking a long walk outside, I feel less like crap. It actually GIVES me energy, which is completely counterintuitive, yet true. REMEMBER THIS, SELF. Just go for a walk! Sheesh!

- I made the best muffins ever, perhaps because they taste more like cupcakes, whatever. They are so good, and made the house smell like... like Martha Freaking Stewart lives here. There's the recipe. Except I don't add the extra sugar topping. That's insane. Just toss oats on the top.

- I am back into the swing of things with the reading portion of my days. My previous pick was much too Thinky for me. I'm now enveloped in Empty Mansions, after having waited for it to filter through 100 other people's holds. It is lovely, and when actual time for bed rolls around I have been tempted to keep reading and stay up longer. Which I don't do- because that is absolutely the worst idea ever.

- Last three-day weekend was rough, but I am back to being able to be around the children without wanting to claw my ears off. (for the most part) Little Man's constant chatter has gone back to being simply adorable in my view. Which is nice. We're having lovely little dates- mostly at the park. He is not napping with any consistency, even when I run him out at the park. But wait! This is still cheers! So I'll overlook the lack of naps.

Well now that I've got a healthy number of Cheers on the rack, let's head straight into the Jeers, shall we?

- ARTHRITIS, YOU SUCK. All I did was seed two pomegranates this afternoon and my hands ache. It hurts to type. (But for you, reader I am weathering through the pain) And what is confusing is that I had my hands submersed under cold water, as you should when opening/seeding pomegranates. (I just found that link to prove my point, and man, that is a way better system than I have been using. I'll do that next time) My hands were so cold for so long from being wet. Except they hurt so much I want to hold an ice pack, but the cold didn't seem to help.

- I had a migraine again last night. A really stabby one. I slept with the hoodie covering my eyes so that absolutely zero light would get in. (why are eyelids so thin? Seems like a shoddy manufacture, there) Anyway, this pretty much cements my desire to go and start looking into the migraines a bit more. I've already had an MRI, but the medicine doesn't always work, and I need a better solution. Especially after last month's two week string of migraines. That was awful, and can never happen again.

- I am eating way too many of the afore-mentioned muffins. Along with the halloween candy. And bagels. Remember when the smoothies were enough and I could just eat half a bagel and be fine? WHERE DID THAT PERSON GO? I keep resolving to cut it out, but by 10 am I am falling off the wagon hard. By 5 pm I don't even CARE what goes into my mouth, just as long as it GETS IN THERE. I'm baffled. Because 5 pm self still does care if her yoga pants fit. I don't get it.

- I am having ALL THE FEELINGS about The Husband's back problem. He's getting an MRI soon, which is good. But I am still SO VERY WORRIED about it. I think Husband has caught onto this, as he's acting like "I'm fine. Stop asking about it every five seconds!" Except he is in obvious pain. And he falls asleep as soon as he hits the pillow. He won't even listen to my hour of pre-sleep ramblings. At the very least he would add some "hmms" and "yeps" in there. Not so much lately. (I know, nominate me for Best Wife Ever, as his spine/back problem is OBVIOUSLY happening to ONLY ME)

- I am drawing a blank on the last one. I'm sure there was more. Well, check back later.

Oh! And I like it better when posts have at least one picture. But scrolling through my phone has revealed none pictures. I have not taken ANY pictures since Monday? REALLY? Wow, I am losing it. (sorry, Mom, the Picture Queen of America, I am failing as a daughter) Maybe come back in a couple hours, I'll snap one of the kids coming home from school. Or maybe I'll forget. Don't hold me to it, thanks, you're the best.
The girls were in no mood for pictures after the bus. 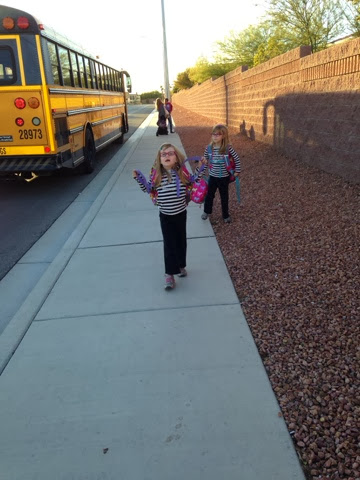 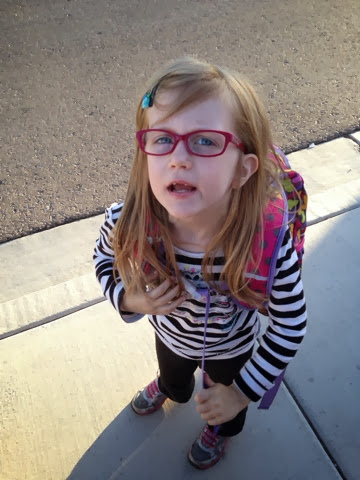 I got candy at school and demand to eat it RIGHT THIS MINUTE. (No) 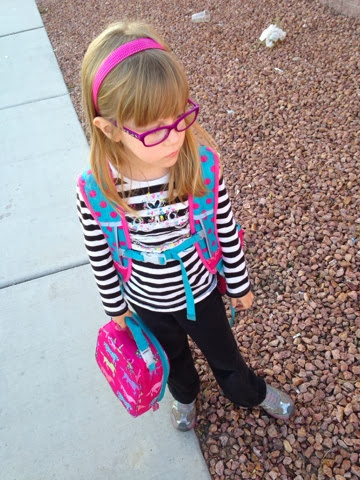 She is the strong silent type. My ridiculous request to "say cheese" was obviously going too far.
Side bite: (that was supposed to say 'note,' but bite sounded better, so it stands!) I have lots to talk about tomorrow. Things that happened directly after this post. HOAs and Whales that don't fit. Fast times.
Posted by craftyashley at 2:32 PM
Email ThisBlogThis!Share to TwitterShare to FacebookShare to Pinterest