This post is brought to you today by this dog: 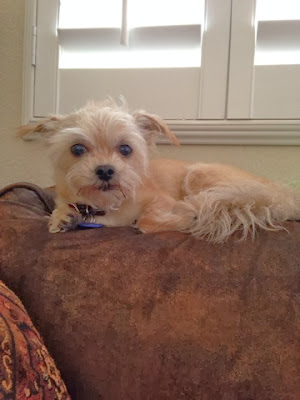 The colors in the picture are out of whack. I don't know why, but am too lazy to retake.

You see, while I love dogs. LOVE THEM. And I especially love the two I have. Well, having dogs and small children? It just isn't compatible. Take last night, for example, when we were awoken at 2am to two howling dogs. One was howling because she was forced to be confined in a bed with a dog who was pooping everywhere. The other was howling because he was pooping everywhere, and getting it all over himself.

AT TWO IN THE MORNING. 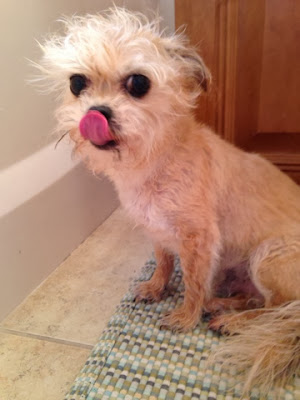 I assume that 2am pukings, feedings, diaper changes, and nightmares are part of the job description with children. I understand this as a fact of life. I have been there.

But parenting animals seems like going above and beyond the call of duty. And frankly makes me wonder why anyone would voluntarily have small children and dogs at the same time. We had the dogs before the kids. And trust me, could I go back in time, I would have done THINGS differently. Except for now that I think about it, Scotty was a rescue dog. WE RESCUED HIM. Had we not rescued him WHERE WOULD HE BE NOW? Fine. We would still have the dogs. We love them so. ALMOST as much as our flesh & blood children.

This situation just sucks. Poop in my house sucks.

Scotty is a very old, elderly dog. He's like a million in dog years, almost 11 in people years. That is old.  I asked the vet a couple of years ago how long the lifespan is for this kind of dog, he told me Scotty probably had a few more good years left. A FEW. He seems to have some mild arthritis, his eyesight isn't so good, we recently found a lump on his chest that I am choosing to ignore*, (vet bills- aka: let's drain your bank account) and now the trots. (I am really trying to refrain from using the D word outright, as that is gross) Hopefully this illness is due to the pilfered blueberry muffin that may or may not have been a bit past prime. He'd also grabbed a just fine, but with cream cheese bagel the day before. He is sneaky. He is faster than the children.

It still leaves me with the cleanup, and constant watching/confinement of said dog. And the nagging reminder that, at some point, this dog is going to... go to the big farm in the sky. Which is a thoroughly depressing thought. I never want him to ever NOT be a presence in our house. (I would enjoy him more if he didn't rage pee on the kids' stuff, and maybe let the kids pet him once in a while? A little snuggling, Scotty is all I ask)

I will, of course, be super mindful of his quality of life. If he ever acts like he is in pain or unhappy with the condition of his old age, I promised him (and myself) that I would make the responsible call. Even though having to make that call will completely devastate me. I'm keeping an eye on him now, making sure he doesn't cross the line from his normal perma-napping self into lethargy. He seems to be ok. He came over while I was loading the dishwasher sniffing around for scraps. Not with his usual "get out of my way, woman, these are MY SCRAPS," but still.

He just needs to live forever is all.


Oh and every time Scotty gets a bath, I throw peaches in there too. 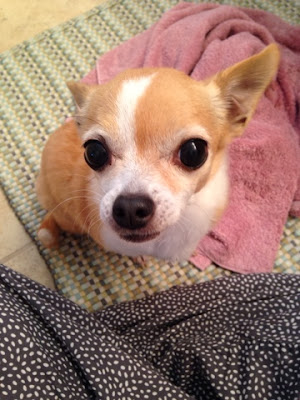 SHE IS NONPLUSSED about the situation.
I believe she is trying to hypnotize me into never giving her a bath ever again.

How about I call a moratorium on the medical issues in this house for a while?


*Clarification! I am not taking Scotty to the vet for the lump, and it isn't because I'm a bad person or negligent nor am I a cheapskate. Okay, that last one was a reach. I'm a BIT of a cheapskate. But listen, the lump is either a fatty tissue tumor that unless it grows to gigantic size and makes it hard for him to get around--- (not even close right now, it's the size of an almond) OR! It is super deadly, uncurable rare dog cancer. Either way it doesn't really change the treatment plan of ignoring it until something else happens. HE'S FINE. We'll be fine. He has not, as of 3:01pm had an accident in the house. THERE IS HOPE.

Posted by craftyashley at 11:15 AM
Email ThisBlogThis!Share to TwitterShare to FacebookShare to Pinterest