A Reminder To Carry Petty Cash

As a rule I don't carry any amount of cash on me. Besides the stray quarter (for gumball machines) and a frillion pennies, (for pond/fountain tossing) everything goes on the debit card. Like the sixty seven cent pumpkin for Squirt's class? Yes, I swiped it.

The advent of the debit card was monumental in my life. Those things solved so many problems for me. I feel like a fool counting out money- I'm terrible at it, I even became all cold-sweaty, mind-racy about it.

Math has never been my friend. Numbers are my arch-nemesis.

We rarely buy stuff in stores anyway, having transferred most of my purchases to the digital realm- where three kids cannot hide inside of carousel clothing racks.

So imagine my surprise when Bunny announced her tooth was loose. Really loose! 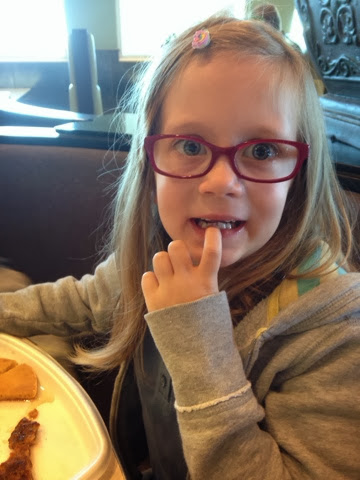 Yeah, we were having breakfast at McDonald's on a school day- WHAT OF IT.

That tooth is hanging my mere threads. I have the specially ordered owl tooth fairy holders, all set and ready to break out and blow some wee minds.

This is where I realized the tooth fairy business is pretty much a cash & carry operation.

Yeaaaaah. It took me that long to put the peices together. The tooth fairy needs to make a run to the ATM. (I'm still kind of wondering why our small children don't just have pay pal accounts at this point. Is it because the mall carousel doesn't take pay pal? Perhaps)

While we're talking about milestones- what, perchance, is the going rate for a tooth these days? My Dad said he got ten cents back in the day. Would a dollar be adjusting properly for inflation? Keep in mind I have twins, so whoever comes up with ten bucks is going to have to pay me directly.

I get the feeling that the amount per tooth is going to fall as all these teeth start coming due- 'cause I am just that cheap/underprepared.

"Oh, look honey! The tooth fairy left you a piece of string, an Altoid, and a Canadian... I'm gonna say penny? Congratulations, dear. Don't spend it all in one place."

Perhaps I should also take bets on when the tooth is going to give it up already? This is day two of "I can't eat anything other than things the consistency of apple sauce because my tooth hurts." And it's getting old, guys.
Posted by craftyashley at 9:38 PM
Email ThisBlogThis!Share to TwitterShare to FacebookShare to Pinterest