This post is brought to you by the stark emptiness of my bedside table, where I keep the books I read. Relatedly, there will be a library run happening tomorrow.
So maybe this will be short, maybe not! Let's take this roller coaster together.
We totally overdid it last week. We partied hard. And I mean had the in-laws out, stayed up late without naps, ate whatever we want, swam so much our skin will forever be a little wrinkly kind of hard. And now I'm spent.
The kids, no matter how much we asked of them were kind of awesome. I was amazed at how few tantrums were thrown. Perhaps it is the afterglow of being doted on by multiple grandmas? Or being fed milkshakes as a meal? They were gems- which I should say more often about my kids.
Tonight as we headed up to bed the husband said something like, "hey, you were really laid back today and it was cool." He is referring to dinner when I happily ordered chocolate ice cream cones for all three littles. The girls were wearing light colored shirts, ones that he knows are my favorites. I would hand them plenty of napkins and let them have their "first ice cream cone experience." I sat back and watched their glee. It was messy and I didn't care. You should have heard the excited gasped when the cones arrived at our table. It even melted the server, who was probably already miffed about needing an extra staff member just to bring us dessert. (Turtle custard sundae? YES) 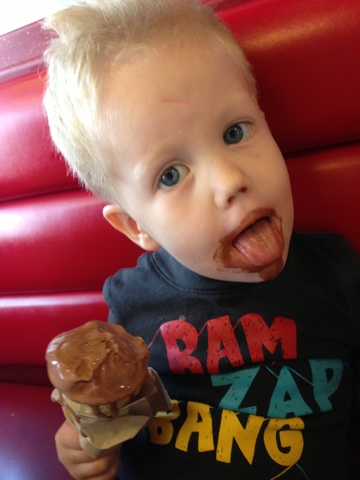 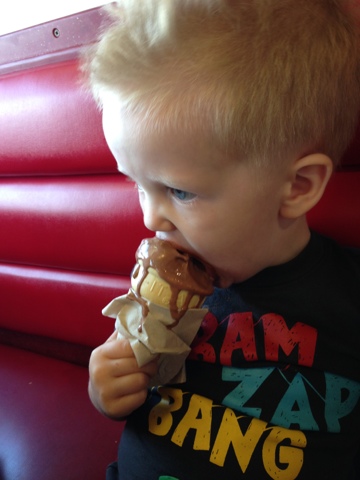 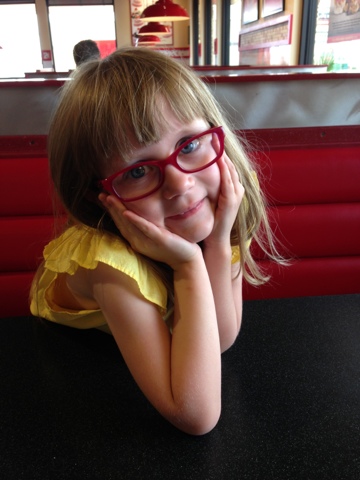 It was a lovely time. So much so that before I fell asleep that night I decided to "reward" the kids by giving them a special gift in the morning for all the good behavior. That is, apparently where I went terribly wrong. I had some cute silly nonsense stashed for such occasions, but had to run to the grocery store (nearest store open so early on a Sat) to get Little Man a toy that wasn't a barrette. Upon waking them and surprising the group with praise, presents & pancakes with sprinkles on top, the mood began to turn. All the pent up crazy began to ooze out of the kids.
Additionally, The Husband had to return to work after the week-long vacation. That first day? Monday was a crap storm. And it has gotten progressively worse. I started working out again, after gaining 3 lbs and flipping out about the nightmare of fattening up again seemed to be coming true. So I'm sore. Walking up stairs kills, and I am so deeply hungry. (Turtle custard sundaes will do that) Ok, I am the lion's share of grumpy. I tried to redeem myself (and the children) with a fun filled trip to the aquarium, which went wrong in so many directions that I CANNOT EVEN BEGIN TO GO THERE. By the time tuck in arrived, I had the firm sense that the girls especially felt picked on. One mention of Bunny's previous histrionics during the day pierced her little feelings to the quick. Both girls had trouble getting over the fact that they had misbehaved, and there was lots of dramatic sobbing.
There are times, scary times indeed, in which I see too much of myself in Betty Draper, and it chills me. And yet- here I am.
I had a dentist tell me I need three cavities filled, and my lands is THAT going to take a lot of Valium to get through. Just thinking of doing that. I can't. I also have a 9am doctors appointment in which I will be bringing all three kids along, just to cement that fact that I am crazy insane and may fight the urge to request a medically induced coma just to have a modicum of a "break."
Which is stupid because the kids are having a sleepover at grandma's. They even have their own suitcases for the occasion. Mark "suitcases" as their most prized worldly possession at this point.
In increasingly better news, I feel like throwing myself a parade for buying, and fitting into several size medium/10 outfits. It is a major accomplishment. Yet I am so suspicious of myself and my stupid body waiting for the other shoe to constantly drop. Hot dang do I wish I was one of those women in which weight has not been a lifetime struggle.
I am just going to hit publish right here without any proof read because The Husband is giving me the time-for-bed-glare.
Posted by craftyashley at 10:01 PM
Email ThisBlogThis!Share to TwitterShare to FacebookShare to Pinterest