Results. I have them.

--- First off, in all honesty, I wrote the bulk of this much earlier in the week and then promptly forgot to finish & post it. So let us all pretend that we have gone back in time and are reading this... say, Wednesday? Thanks ---

Results! They are in! Can I first start by telling you just how low my expectations for The Biggest Blogging Loser were? I was thinking MAYBE I'd lose 5 lbs. Maybe.

Reach for the stars, kids.

Let me tell you something, when your youngest kid is three years old, you can't hide behind the "baby weight" screen anymore without looking silly. The birth of my son and many of the events following were traumatic. (surgeries, death of family members, selling an underwater house, three moves in two years, financial instability, just to name a few. Yes, there really is more) Weight loss just did not make the radar until January when I stumbled onto The Biggest Blogging Loser announcement. I figured I would just try and take some baby steps towards becoming a healthier person.

The heaviest I'd ever been was 250 lbs, pregnant with twins. That first weigh in, granted it was right on the heels of holiday indulgence, I clocked in at 193 lbs. Yet I oddly felt ok with my body. Did I look amazing? No. But I was eating whatever I wanted, and that felt good.

The first week or so I lost 10 lbs. It was all just numbers to me, I did not see any difference in my body, like at all. Enough to be somewhat discouraging. Slowly, I started to notice my clothing was more comfortably loose. I was wearing a size 14 jean. I had probably been squeezing into it, and was most likely a true size 16. So clothes fit! Ok, great.

The weight kept coming off. I was finding that a "cheat day" was beneficial in my weight loss. Not only did I feel that I wasn't being "deprived," my body didn't go into starvation mode. Which apparently, it goes into very easily.

At the 20 lb mark I started to get my hopes up. I MIGHT have a shot at winning this! My 10 year wedding anniversary was coming a few weeks after the last weigh in, and I started mentally spending the prize money. I also had to overhaul my closet and switch to a slightly smaller size, the 14/12 I had been keeping around for a while.

As the weeks continued I started to tire of the routine. I got sick for a while. I didn't want to work out. I had pulled a weird muscle in the arch of my foot. (it still gives me some searing pain once in a while) I saw the end approaching, and I started to panic about a variety of things: 1) I would be super upset if I did a last-minute push and came VERY close to winning, but did not actually win. I would loathe that one or two pounds that separated me from the #1 spot. (Bear in mind, I only ever hit #3 on the lists) 2) The diet/exercise was easy enough when there was a definite end date. "I can do anything until... April!" 3) I would be sorely disappointed in myself if I lost all this weight, felt good about my body, only to gain it all back. (might I add that I have donated all of my larger clothing? You know, as a motivation? Ummmm, yeah)

So mixed feelings as I approached the 30 lb. mark. I did notice a difference in my figure, as did seemingly everyone around me. I bought some size 10 jeans at American Eagle. I had not shopped anywhere but Target and or the "big lady" store for clothes in... too long to remember. I looked and felt great. I dropped my Fresca habit.

At Easter dinner, I had a bottle of water- period the end. This was my mistake. I cut my intake too much the last week. The determination to have a fabulous spending spree weekend with my winnings too great, it eclipsed all hunger. I had convinced myself that to win, I would have to get down to 160. Earlier that week, I weighed in at 162. I thought I was so close.

The last weigh in on Monday came up as 163. I won't sugar coat it, I was devastated. I felt so much rage toward myself for "letting it all slip away." I had a very dark day on Monday. It was childish and petty, and made me feel like an awful person to whine about "losing" when I'd gained so much from the experience.
The experience was wonderful. The people I met! They are The Best People. The all-inclusive support and camaraderie was amazing. I have so many warm squishy feelings for so many of the participants that I follow on Twitter. And Jennie? I simply adore her. I am a shy, often awkward person. All the other people are awesome and hilarious. That is how great these people are, loads better than me!

Thankfully the winners were announced and I was nowhere near close. Not even a perfect weigh in at 160 would have made it happen. Weird little hallelujah moment, there!

Anyway. In conclusion! I am nervous that I will no longer have the motivation to keep losing, let alone maintain. The past couple days have been a bit of a stuff-my-face-athon. But I am going to try and renew my commitment to myself- starting today. I am not sure where my "goal" is right now. At my smallest, I was around 140- but that was college! The year I took legit ballet classes! (I was still the "biggest" girl in the class due to my busty front region) I do not know if that is attainable. Maybe 150? Could I shave off another 10 lbs? Perhaps I need to focus on toning. We have a real toning problem up in here. (having twins, man. There is no coming back from some of that)

Oh, also: my blender died. The smoothies were a large part of my success. I am debating on the prudence of spending $400 on a Blendtec. If I keep it up and make the smoothies daily? Maybe. However there are plenty of big ticket items that money needs to go towards. I don't want to be frivolous. Plus
I am already over-budget on replenishing my wardrobe to the new smaller size. My previous wardrobe budget being zero.

However I've been pouring over the Internet and have shown The Husband a multitude of different blender options. I finally found a midrange model priced around $200. And guess what he said?! "Meh, just go for the Blendtec."

That is when I died, everyone.

Oh! And below are the before and after pictures. I don't see that much of a difference. The camera lens is a real jerk sometimes. 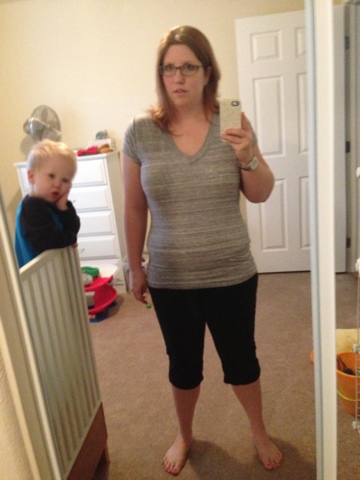 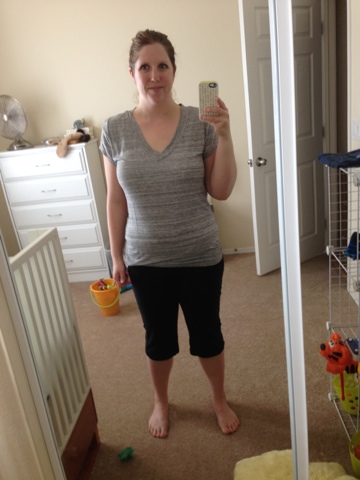 Posted by craftyashley at 2:31 PM
Email ThisBlogThis!Share to TwitterShare to FacebookShare to Pinterest