Around the age of 13, I made a pact with myself. That I would put on at least mascara every morning before heading off to the bus stop. I made a conscious decision to ensure that the lasting image my classmates had of me was not the bare-faced child of my youth. It was one of the first steps towards adulthood. I was strict about it. Even when I pushed the snooze button a few too many times and had to rush to wherever I was supposed to be, I had a minimum makeup requirement.

Since having children, my standards have had to bend. Flexibility! Seems to be the siren song of new parenthood. But it always felt like a phase. I knew I would not be spit-up soaked for eternity. And even then I usually still had makeup on. Most certainly in public situations.

Now I am in a much different stage in life. I walk MY kids to the bus stop each morning at 8:30. In those first few days I was meticulous in looking semi-together. Like Grocery Store Casual. (ie yoga pants, hoodie, hair in a tight bun, eyeliner and mascara.

However keeping up that regimen while getting three kids prepped and out the door became an impossible feat. I started leaving the house in full-on pajamas. But I was wracked with shame. I felt practically naked, and my self esteem seemed to plummet without the crutch of a bra and some makeup. (No worries- I have made it an official rule that I must at least have a bra at the bus stop)

But the makeup? I've moved passed those insecurities. This is who I am, the core of who I am. Without hiding behind the foundation, eyeliner, mascara, and even without the large sunglasses in case I have to forgo all of the above. I'm learning to find the beauty in my own bare-faced self.

Just shy of two decades later, I am at a bus stop without the "beauty" crutches, and I still feel beautiful. It isn't Hollywood beauty. It is simply a modicum of confidence that I hope to nurture. 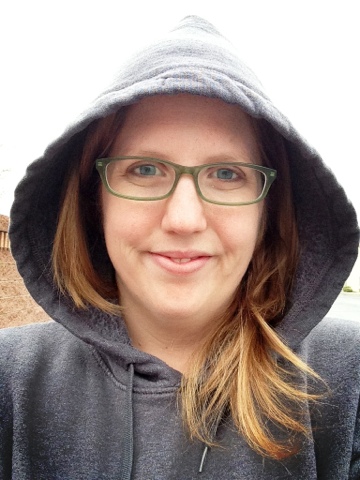 Posted by craftyashley at 9:37 PM
Email ThisBlogThis!Share to TwitterShare to FacebookShare to Pinterest