Or, a tale of rules and perceived organization that leaves me sweaty and disgruntled

After further reflection on the events that unfolded at Kindergarten Drop Off, I have THOUGHTS. And these thoughts include a poorly constructed picture.

At "orientation" I received a little letter titled "Common Questions." This letter was pretty firm about parents "staying behind THE GATE." Implying "safety" reasons for this policy as well as keeping things orderly. In practice, the "avoiding overcrowding" portion was an epic fail. Here is the promised poorly rendered diagram of the whole situation: 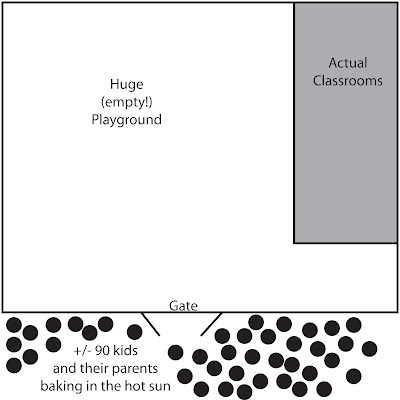 (all of this is to scale)

The teachers insisted on calling the children back into the playground one by one and asking the parents who would be picking the kid up afterwards (supposedly we had all filled this out on forms prior to the first day) With three kindergarten classes,  there was a crap ton of children, and about two parents for each kid (except for me who had two kindergarteners, plus one baby, all by myself)  Once the kids were behind THE GATE, they sat baking in the sun until everyone was accounted for, then they marched across the playground in lines to class.

By the time this was over, I was drenched in sweat. As was Little Man, who was beet-red in his stroller. I should also note- there is no shade. Little Man was not only overheated, he was FURIOUS about not being able to attend Kindergarten at the ripe age of two. There was flailing.

When I got home, Little Man was having fits of rage at the indigence of his low station in the world, missing his sisters, (surprising) and... he's teething like mad. Drooling constantly. This is the point in which I had a good cry. The thought of having to repeat the madness at pick-up and even the next day made my stomach turn.

The situation was slightly better at pick-up. There were far fewer crowds, and while it was hot, I managed to pack everyone back into the car and asked about The Big Day. This is when the quarreling began. Even my announcement of celebratory Happy Meals for lunch was insufficient to keep the peace. Squirt was heartbroken over hearing about Bunny's "better" class experience. (she got to play on the playground and colored a picture, whereas apparently Squirt did... something else?) I tried to reason with Squirt, and asked if she liked her class. Her answer? "No, teacher yelled at me and made everyone put their head down on the desks." I am fully aware that a five year old's testimony of events are oftentimes skewed, but that made me a little bit surly on my insides. (how dare some lady make my angel's first day of Kindergarten seem like a labor camp! I am trying to give this teacher the benefit of the doubt and not be the overly-annoying-parent in this situation. However, WAAAAH)

In the car, the girls told me their teacher gave them books to read at home. (oh boy!) Upon further inspection of their backpacks, I found they had received the dreaded "Entertainment" books full of "coupons" we are to sell to friends and family as a fundraiser for the school; ON THE FIRST DAY. I was not prepared for that, and feeling rather upset about school in general I replaced the items with a Post It informing the teacher we are not participating in fundraisers. (I hope that was not too snarky)

Along with the "books" (by the way, the girls were heartbroken that these were not reading books) came a stack of papers; information on cheating and code of conduct instructions that the kids are asked to sign. KINDERGARTENERS! Pledging not to cheat! Included was a section for the parents to sign, pledging to devote a minimum of five hours to school-related stuff. (HO, NO. I am not PTA Mom. Not by a long shot) This pledge also included a rather condescending bit about controlling my child's time in front of TV, video games, etc. NONE OF YOUR BUSINESS, SCHOOL!

My level of anxiety over all the "new" is now at record highs.

I continue on to the explanation of our school's new pilot program on grading. While my kids are quite young, and I'm pretty sure it is extremely difficult to fail Kindergarten, I could not help but roll my eyes at the throwing-out of standardized grading systems. It's a whole "thing," in which I will spare you the mundane details. My feelings on the matter? I am not into this.

It was alarming that I was actually considering the merits of homeschooling; ME! Considering it!

After I had recounted the events of the day to The Husband, I may have started to seem like a crazed lunatic uttering nonsense about "who really killed Kennedy." The Husband gave me a hug and suggested I go upstairs and take a breather. My mental health was definitely teetering.

Today, however, is Day Two of Kindergarten. I tried really hard to be optimistic. To my surprise, drop off went much smoother as I refrained from arriving any type of early, and the teachers announced that tomorrow the kids will be admitted straight to the classroom, which will improve the situation even further. Did I forget to mention that yesterday I arrived 15 minutes before the gates were slated to open? We stood in hot sun for 25 minutes. In hindsight that may have been my fault for being too eager and timely.

The girls continue to test my patience- they are adjusting. I am adjusting too, so we all may be quickly incited to rage. In the end?

School! I will take it!

Posted by craftyashley at 10:17 AM
Email ThisBlogThis!Share to TwitterShare to FacebookShare to Pinterest