The Lunch Debacle (among other things)

This has been a particularly face-melting week. It is (a) the end of Daddy's week off, (b) the first week without preschool, (c) the week everyone is finally over the flu, and (d) too hot to play outside.

So obviously, the natives are restless.

I had outings planned to try and out-schedule the crankiness. Before nap and after nap outings. Fun things like park time with friends, a visit to Build a Bear, and swimming at Grandma's. Well, it didn't work. Not only were they acting like vicious lions at feeding time, they were also being! rewarded! for! terrible! behavior!

It was downright AWFUL.

One of the issues was lunchtime. (mealtime in general is usually a pitfall ripe with failure) Squirt decided that she was not going to "do" lunch. At all. In any form. (especially sandwiches!) I made pb&j, melted cheese, and turkey sandwiches. None were eaten.
More than that she would scream to be let down so she could play with the two who had eaten their meal.  Screaming for over an hour.

I simply could not understand!

Did you want to go swimming after naps?!

THEN EAT HALF A SANDWICH FOR CRYING OUT LOUD!

It would be a huge battle and would always end in me dragging her upstairs for naps, kicking and screaming, (I have the bruises to prove it) having to be talked down to quiet, only to be woken an hour later by a short napping Little Man.

On day four of this madness I had just about enough. I was flush with rage as I put everyone to sleep. I went downstairs and plotted my recourse. It might be loud, there would definitely be tears, but would it... work? (I should insert that I do love my children, and seeing them in such a state of distress burns through the soft tissues of my heart)

Order needed to be restored to our lives and the fits needed to end, so I devised a plan. I was going to have to grit my teeth and get through the next portion of the day... just until bedtime, I reassured myself. Upon (again, early) waking from naps I informed the kids that we would be coloring. (even through all my fun planned activities they had been begging to just color with some dang crayons) The kids rejoiced.

Then the hammer dropped:

Squirt would not be coloring, or doing anything fun, until the sandwich half (it's just a half of a sandwich! How hard can this be?!) was eaten. Said sandwich was downstairs in a ziplock baggie atop her plate.

Enter the tantrum to end all tantrums.

I had to wait it out, all the gnashing of teeth, one thorough time out upstairs, but in the end! She ate the dang sandwich... at nearly 5:00. Still a victory.

Being terrified of what fresh new tantruming I was in for today, I took all three to the movies and stuffed them full of popcorn. We learned a couple things: 1) Little Man is too young for movies, and 2) no matter what I do, the kids are going to freak out on me, especially when we are an hour passed naptime.

Today was not the great victory dance I had hoped for. Parenting, man! Who knew it could be so hard... and unrelenting?!

Oh! I almost forgot! I made this Gak stuff: it's more squishy than Play Doh, and it does stain wood, (like, dining room tables for example) but it was an hour of quiet play while I licked my emotional wounds on the couch. 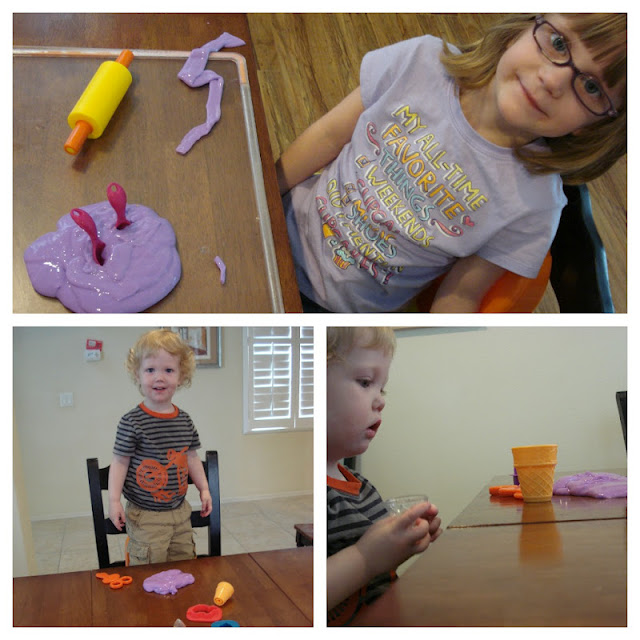 Look at them! Being all chill and adorable. I'll bet you don't believe me about any of the acting up and horribleness, now!

Agh! And now Blogger is telling me I have ran out of picture-storing-space. Now I need to go figure that out... Fantastic.

Posted by craftyashley at 4:32 PM
Email ThisBlogThis!Share to TwitterShare to FacebookShare to Pinterest