No Sleep For You!

Let me set the scene, at 8:00 Saturday night, The Husband and I sat watching some TV; Until I realized there was some faint screaming in the background. Due to some minor monitor malfunctions, we were not listening to Little Man's room, but had two receivers tuned into Bunny's room. And Little Man was having a real problem.

He was struggling for breath taking huge gasps, totally hysterical, and very pale. One look at him and I half-screamed for The Husband to come up. The call to take him into the ER (after realizing that Memorial Day meant the earliest to get him into the Pediatrician would be Tuesday at best) was made swiftly, and I pretty much just raced him downstairs and without a thought about packing for a trip, left for the hospital immediately.

Only to find myself totally unprepared to stay in a tiny exam room for eight whole hours. We literally did not get discharged until 4 am the next morning.

Little Man, being sleep trained by yours truly, could not sleep without his a) blackout shades, b) sound machine, and c) blanket. HE STAYED UP THE WHOLE TIME, unable to fall asleep without these crutches.


Pictures were taken, mostly just to entertain the sick child: 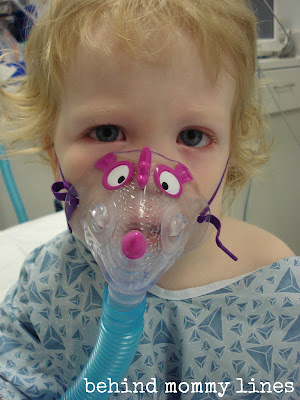 At some point- around midnight- the kid was given some meds that caused him to throw up all over the both of us, he got a wardrobe change. (I did not)

It was nothing short of the most harrowing night of my life. Not really having anything to do about the medicine of the matter- he just has really bad croup, nothing major or life threatening. It was just being caged for that long on so little sleep to begin with... it drove me to the very edge of madness.

Did I mention we arrived home about 4:30 Sunday morning, only to have the boy wake up at the plucky hour of 7 am?! Not nice.

In other unfortunate news, the twins missed their preschool graduation. I was sick with the flu, as was Squirt. There was just no taking them to get their adorable little hats and diplomas. At first when I saw there was a whole "graduation ceremony" planned, I totally balked at the idea. It's just PRESCHOOL, people. But then I caught a glimpse of them trying their little motar boards (the graduation "hats") on and I immediately went all gushy. So naturally, we missed the whole thing on account of the flu.

I still weep a bit inside when I think about my babies! Missing their graduation! There was a SLIDESHOW. The misery!

It has been two weeks of someone being intolerably sick in this house. And the remaining "survivor," The Husband, just started feeling ill.


Posted by craftyashley at 10:13 AM
Email ThisBlogThis!Share to TwitterShare to FacebookShare to Pinterest