The Humidifier is Taunting Me 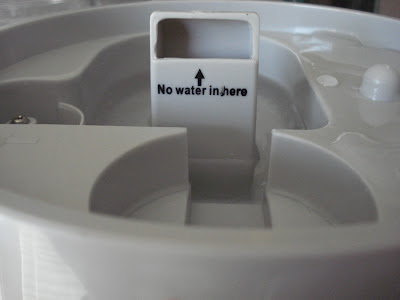 You have no idea how much I want to dump some water in there. Just because I don't like appliances objects bossing me around. 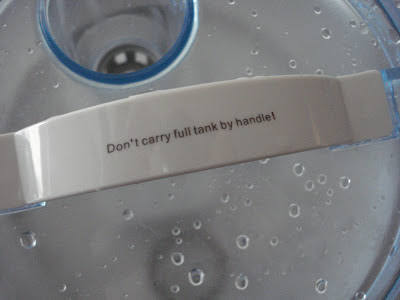 And ones that use exclamation points are even worse.

Did I forget to mention that The Husband has bronchitis? He has had this horrible, earth shaking cough for about two and a half weeks. And people! It is bringing me to the very edge of sanity. The coughing! The excessively loud coughing! I have had little sleep over these weeks. While I feel terrible about being so startled, then kinda upset with him FOR COUGHING, I am beginning to lose my mind.

In an attempt to calm the cough-that-wakes-me-up-every-ten-minutes, I broke out the humidifier. I gave The Husband a choice: penguin or elephant. And he chose the elephant humidifier. The only problem with this (and I guess the penguin would have the same problem) is the tiny green light that informs you the steam is on. In a dark room, this light! It is SO BRIGHT! It penetrates my eyelids! It follows me around the room! It is clearly evil.

And all the humidity, while it tames the cough, turns out to make my sinuses all swampy. Now I have a sore throat. Great. Wednesday night things came to a head- the coughing, the green light, the mucus-y head, the previous weeks lack of sleep: it drove me to a panic attack about bacteria. Even though we have the "cool mist" humidifier and the chance of it harboring bacteria is slim, my mind blew this small possibility out of proportion. Well the small percentage AND the fact that I had not done the vinegar bath before storage- as per the little instruction booklet.

So of course my throat started closing up due to the BACTERIA that was surely KILLING US SOFTLY.

At about 1 am I gave up and went downstairs where I watched a lengthy documentary about the Amish... until 4 am, when I tried once more to sleep in the Room of Death and Bacteria. Which was impossible.

So I was a walking zombie Thursday. Parenting without sleep is hard. (I know that nugget of brillance must have just blown your mind) I was also complain-texting with a friend for most of the day. She wanted to know why I was so sleep-deprived. (and why some of my texts were making very little sense) After typing the whole thing out I realized how insane it sounded, and was not surprised by the consensus that I should probably be in THERAPY or something as my friend agreed- humidifier panic attacks are not normal.

In any event,  I have ALL the humidifiers lined in a row on my kitchen island, bathing in vinegar today. Fun times. At least I got a full, unisom-induced night of sleep and can therefore function like a normal human being once more; Yay.

Posted by craftyashley at 11:40 AM
Email ThisBlogThis!Share to TwitterShare to FacebookShare to Pinterest