The other day at the park, my kids were busy running amok. A cute little family joined the fun. The Mom was super skinny, yet obviously pregnant, and gorgeous with full hair & makeup. She had a small little girl, I'd say about 18 mos. old. And that little girl was entranced with Little Man. Entranced. She followed him everywhere, then got up the courage to reach out and touch his hair. At this, Little Man froze still as a statue until the girl was done. Then ran down the play structure as fast as his short legs would take him, and promptly dropped himself into my lap. I'm glad to be THE girl for him right now. 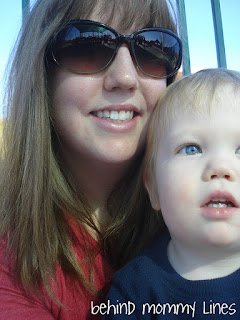 So he sat there while I snapped pictures.

Do you like my huge sunglasses to cover the fact I have no makeup on? Yeah, it was one of "those" days. Not everyone can be classy at the park, impossibly beautiful park Mom. I was in yoga pants too, lady. Try and look a little less stunning and perfect, thanks.

This morning found the baby with a leaky diaper. Not the most welcome of surprises in the am, but it did force me to strip his bed and put it to wash. I am finding with a boy, that even though it's incredibly difficult to change crib bedding, boys make an awful mess in there somehow. Putting it off too long is probably ill-advised. Man, those sheets were filthy- and I had no idea. The crib tent tends to obscure the light in there. Seems like I should not have to bend myself in half, impaled by the side rails, rending my kidney in two, just to wash some sheets. Improvement needed, crib makers of the world; I'm putting you on notice.

During the breakfast routine (today: oatmeal. tomorrow: pancakes, day after: cereal, repeat) I happen to come upon the baking soda box and it's "replace by" date of Aug 2011. This was interesting as I usually never write down the date on the box and opt instead to wing it. I thought about changing the box out, except that I realized Mr. Arm & Hammer recommend replacement every 30 days. This seems suspicious to me. Even though, yes, I have had the same box of baking soda in there since July. I've decided that Big Baking Soda (yes, I said Big Baking Soda) is just pulling my chain on this one, and I will be replacing that little orange box in a year. Yes, I've unilaterally decided that one year is more of an accurate time-frame for a box of baking powder to do its job; desmellifying my fridge. It's been (let me count...) 6 mos, and my fridge doth not reek!
I use the same approach to our refrigerator's water filter. It recommends every 6 mos I replace the mail-order-only, 40 whopping dollar filter. I do so every 2 years. Take that, General Electric.


Posted by craftyashley at 9:37 AM
Email ThisBlogThis!Share to TwitterShare to FacebookShare to Pinterest