Sometimes I find stuff that either really disappoints me, as a consumer, or is the answer to all of my problems and woe. Sometimes Style Lush tells me to switch detergents, and I do.

Before I buy a year's worth of Method Laundry Detergent, I have to get online and go nuts pouring over review after consumer review. Then I always get cold feet. Ah, I could go on, but that would be the boring part of what I'm trying to say. I do my own reviews, mostly because I was looking for good reviews before my purchase, and there was a lack of real reviews (besides the glowing Style Lush review- Style Lush being people I listen to) I am not compensated in any way for this. It's a service I freely give-- because there are too many nut-jobs out there posting reviews on websites that make any product seem like total crap. I am a normal person, who can give non-idiot-advice from my experiences. Seriously, the amount of people who "just couldn't operate the pump" on this detergent was distressing. It's not that hard: push down... liquid squirts out. Dummies.

So! First I'll start with my washing machine: I hate it. But it's practically brand new, so buying a different one seems like a terrible waste of money we don't particularly have. I have excessively bad "washing karma," to boot. Basically, I am a terrible laundress.

Problems stem from my top loader that has no agitator- it is trying so hard to be a front loader, however the results suck. It uses a lot of friction and pull to "agitate" the clothes, sometimes my favorite little girls' crop jeans from Nordstroms rip at the seams from all the pulling from my washer- and I hold a short funeral... there are tears.

I also have a huge problem with color bleeding. (It's happened more than a dozen times) I've also found other people's washers get stuff out way better than my washer, especially when it comes to oily stains, or color bleed stains. In fact! One shirt that was totally destroyed, a sweet green tee with embroidered cupcakes... eventually tie-dyed with unfortunate red streaks. I sent this shirt as a freebie with ThredUp, (love that clothes swapping!) figuring if they couldn't get it out, the receiver could just toss it. Well, I got an email after sending it that the bright red stains totally came out in their washer- I almost died, and the fire of hatred for my own washer burned deeper.

There's also the problem that, like most HE washers, it can smell awful in the cavernous drum, and the detergent tray gets backed up; a problem remedied only half the time by Tide Washing Machine Cleaner.

Do you feel bad for me and my crappy washing machine yet? Thank you.


In light of all this laundry-related stress, I jumped at the chance of a better washing future with this new Method Laundry Detergent: 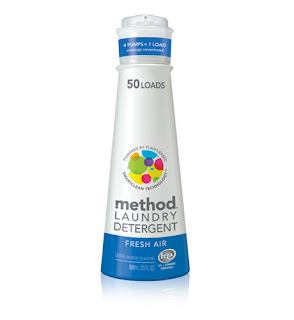 Let's start with the pros:

- The size! This bottle is about the size of a bottle of Windex. Easily held in my hands, and takes up way less shelf-space than the gigantic plastic tubs: 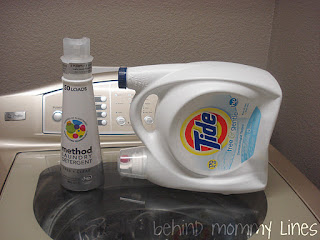 Sure, the Tide container says it yields 100 loads, but I tend to use more than the bare minimum for a load. However, with the Method I have stuck to the four pump rule quite strictly, so I know there are genuinely 50 loads in that tiny package.

- The pump feature! Instead of pouring syrupy soap into a cup, then having it drip all over the shelf and into every tiny crevasse of my machine- I spritz a bit straight into the tray. No mess! While I've managed to keep things clean so far, the last house had what looked like stalagmites (stalactites? Can't remember the difference!) of laundry soap dangling from the washroom shelf. This change to drip-less is HUGE for me, people. I cannot emphasize that enough. 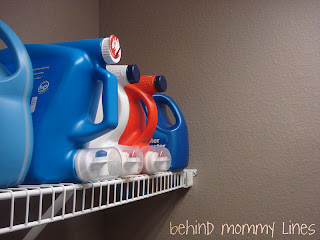 - It cleans! A handful of reviews on Amazon scared me. (even though the majority are very good, I can't pass up reading the bad ones) Some said it did not clean at all. Some claimed it seriously faded anything it touched. I have found neither of these statements to be true. The Method Detergent hasn't been effective with the oil-stains, but neither was the Tide. I still use a pre-treater on major stains, but so far my laundry has come out nicely. It is even softer than normal, without adding fabric softener- which Little Man is allergic to anyway. I've used it on The Husband's uniforms, which are the dirtiest things I can think of, and he has not complained. I'm quite pleased that such a small amount of soap- and believe me, it is a SMALL AMOUNT!- can really work. I have my own black-helicopter-theories that the little HE sticker on detergent these days is just corporate trickery- nothing has changed about these detergents, and they're mucking up my washer. (hence the clogged trays and icky smell) The Style Lush review pointed out a lack of mildewy smell, it is true! This is probably way more HE-enabled than everything else out there.

- It may be a bit more expensive. I'm not at all good with numbers. I don't even remember what I pay for my giganta-tubs at Sam's. The Method detergent was on sale at Target: I bought the dye/fragrance free for Little Man and a couple of the scented ones for the rest of us for around $12 a bottle. Normally, I believe it is $15? The lack of mess makes it worth the price for me.

- The Free + Clear, which I have to use due to the baby's extremely sensitive skin, does leave a very slight chemicall-y smell when the clothes are wet. After drying, however, they smell fine.

- Reviews have said that the pumps can malfunction or be defective. I've used two already and have not had this problem. However if I did, I would probably just take it back to the store for an exchange. Again... the pump is SO WORTH ANY SACRIFICE I tell ya!

I really like the Method Detergent and am using it with all my loads, the daily, heaping loads.
I have a couple honking containers stored away, at this rate, I may try and return them or give them away. I've gone Method all the way.


Posted by craftyashley at 10:03 AM
Email ThisBlogThis!Share to TwitterShare to FacebookShare to Pinterest