The Handy Mommy That Could

Yesterday was a monumental point in all our lives. After having survived four days of Little-Man-Being-Able-To-Open-Doors, what I have dubbed "Toddlerageddon: Part Two," (Part One? Mobility) I had reached my breaking point. His constant access to the storage/coat closet and the pantry... it was just too much. He's already broken into some of the cabinet locks. (Heck, he's in there right now with a stack of plastic cups and salad tongs) The closets were my line in the sand; my beaches of Normandy- in that I was going to storm them because I was determined to END THIS.

After naps, I threw all three bleary eyed children into the car and headed for the home improvement warehouse. The unsuspecting salesman in an orange apron was met with my untamed hair, children spilling out of the shopping car, and a wild fervor in my eyes as I demanded to know what aisle the door locks were located.

This man made the mistake of asking "what kind of lock are you looking for?" He should have just told me the aisle number and backed away slowly.

I tried to control my intensity as I informed him I just wanted "something that will keep the door CLOSED... under any circumstances." He eyed me suspiciously, and nodded, "so you want the kind where it will open just a little bit?" His hands made a motion of a door stopping a couple inches after opening.

At this point, he got my drift, (probably thinking I lived in a VERY sketchy neighborhood, trying to keep the crackheads at bay) he led me to the aisle, waved his arm at the selection, "we have a lot of different locks for you to choose from." Then he walked away- smart man. He was good not knowing exactly the problem at hand; there are some things you can't un-hear.

As my eyes scrutinized each and every option, I came upon my solution. These tiny flip locks were $2. I needed two... I bought three. (Hello, two bucks! Always good to have a backup)

There was a slight mishap in which I misplaced the drillbits for two frantic hours. The Husband texted that he was on his way home during this crisis and received the following reply: "Good. Because we are having a tool SITUATION up in here." He was duly perplexed, and probably thought long and hard about actually coming home... to who knows what kind of a "tool situation."

Eventually I found the needed bits and installed the locks in a whirlwind of cursing, mumbling, and stripping about ten screws.

In the end, it was WORTH IT. (as I hear the squeak of Little Man's tiny hand gripping the knob, then a bam! DENIED, SUCKA!)

These little scraps of metal are so simple, though I derive such pleasure from their amazing work at keeping my toddler's grabby hands out of a very small, yet very important portion of this house.

I highly recommend the flip locks. Sure, they may be meant to keep out scary burglars, loan sharks, or the annoying neighbor kids, but they are truly excellent at keeping a baby from squishing all the penne into tiny, unusable bits of pasta. 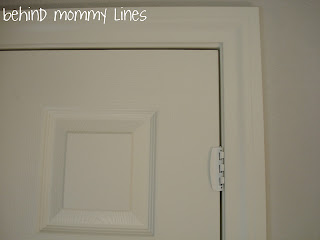 There's nothing like the sweet taste of victory in the morning.

Posted by craftyashley at 10:50 AM
Email ThisBlogThis!Share to TwitterShare to FacebookShare to Pinterest