Can we take a minute to talk about the dogs? You would think actual human children would be the tough part in parenting? I disagree. It is having children along with dogs who are jealous beyond all reason... and vengeful... and possibly deranged.

That is the tricky part, my friends.

Let me tell you of some adventures with our cranky four legged residents.

So we rented this house not knowing it comes with a water softener. Due to the salt that "softens" the water or something, it is a bad idea to give the dogs tap water to drink. The outside hose water is fine, but our spigot is located in a rather unfortunate, anything-but-convenient location. So we replaced the dog's water bowl to reduce our treks to the hose. Judging by the dog's reaction, I have defiled all that is good and holy and brought Satan himself into our home: 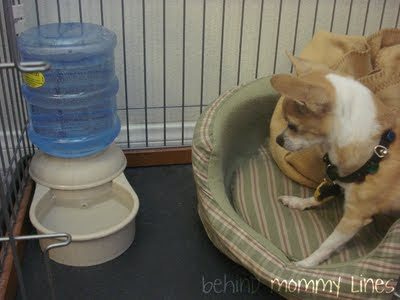 That contraption, similar to any watercooler you'd find in office breakrooms around the world. It has my dogs locked in a battle of wills. They will either perish from dehydration or die of a heartattack due to extreme mental anguish.

Do you see the fear in Peaches' eyes? 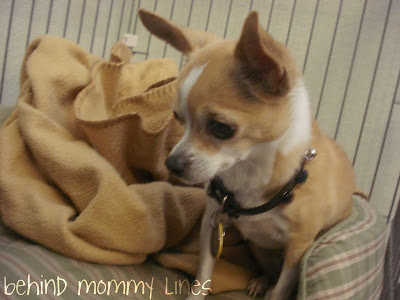 It's blurry (she's also afraid of cameras... tv remotes... vacuums...) but I believe the unbridled fear and dread is palpable.

I believe the issue to be twofold: 1) it is bigger than her. 2) it bubbles. You know like watercoolers do? That special sound? Blub, blub... Peaches hits the wall. Seriously, she vaults herself as far as possible, without regard for what is in her path. Sometimes I just hear the Glug, glug... THUD, there goes Peaches again.

While our differently-psychotic dog, Scotty is much more covert about his anxiety, I have noticed him tip toeing up to it, body shaking, lapping as fast as possible, then backing away. Rule #1- never turn your back on a water bowl; You never know what they're capable of.

Yesterday. Oh, yesterday. I let the dogs inside from assumably going potty on the grass. It is t-minus 2 minutes until naptime, so I  am a bit... frantic. Bunny has a fun new habit of refusing to go down for a nap. Like won't even walk upstairs. It's... precious.

As soon as Scotty hobbles in, I notice his visibly limping. Not just a slight limp; One of his front legs is tweaked up as high as it could go, and he's falling all over, unable to get stability on the slick floor. RED. FLAG.

But I can't deal with it right now, I have got to get the three cranky children TO NAPS forheavenssake! I hope he can "walk it off" by the time I return downstairs.

I wearily trudge down the stairs to find Scotty licking his paw, crying like a newborn, and shaking like a leaf. He won't let me near his paw, and I spend the whole of my blessed nap time trying to coerce the dog to just let me see it! About every hour he will give me five seconds to glance at the problem area before he gets hysterical and I cannot contain him in my lap. During one of these peeps, I find a long prickle and pry it out from in-between the pads of his paw.

At this point, I am thinking, "YAY! Problem solved!"

Except that for the next two hours he is still excessively limping and I am preparing myself for a gigantic vet bill... and dragging an injured dog plus three kids and a stroller into the vet. Rewind two months prior, where Peaches was acting super sick/odd and a $400 bill later- she is fine. Nothing appears to be wrong, she was even kept overnight for observation. NOTHING. FOUR HUNDRED DOLLARS OF NOTHING.

I start texting my husband in panic. I cannot take much more of this! It's been a tough day anyway, and THE DOG! The dog is on his DEATHBED. I'm a little on edge from stress- a whole 'nother post entirely- and this is THE LAST STRAW.

I put him in his crate so he will quit flailing all over the house trying to get away from me. I retreat upstairs to fold some laundry and get away from the whole situation, then wake up the kids from naps (wince)
When I let the dogs out of the pen? Scotty walks ON ALL FOURS. Just a slight favoring of his problem leg, but still: weight on paw. Good sign.

He proceeds to be fine the rest of the night. headdesk.

Dog drama took up 50% of my day. The other 50? Bra shopping: the worst kind of shopping known to man. Dear heavens. Someone shoot me already.

Posted by craftyashley at 10:20 AM
Email ThisBlogThis!Share to TwitterShare to FacebookShare to Pinterest