Michigan being the coldest place I can think of. Second coldest is Idaho. If you know of a colder locale... um, good for you? Anyway, I like to equate our blistering summers to things like Canadian winters. There are many similarities: 1) They last too much of the year. It is uncomfortably hot for about 9 months out of the year here. 2) The weather makes staying indoors the better part of the days more appealing, but also creates some problems when entertaining children. and 3) The extreme weather is damaging to things left outside. I do not dare leave my car outside the shade of my garage. My supple leather seats would crack and become a mess in no time.

I like to bring this up when people try and make me feel like I have it easy with comments like "well, it's a dry heat," (um, it's still 115. Plus we've had one of the more humid summers, 110 + 67% humidity = unbearable) and "At least you don't have to shovel snow out of your driveway!" (yes, but my power bill was $450 last month... for AIR CONDITIONING, and I was still sweating in my kitchen) We pretty much hibernate glued to the the a/c vents just like you snow people stay inside by the fire when you have ten feet of snow outside your door. It is just as miserable- I ASSURE YOU.

A little known fact to those outside our interminable desert? Putting wood outside? Bad idea.


I give you Exibit A: 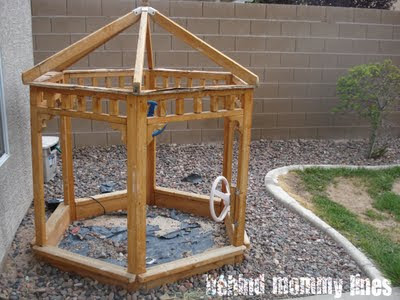 This little... structure was built by the previous owners, for their kids; (you guys, they had five kids... I can't even imagine that) Probably with the greatest of intentions. In theory, it's really sweet. The little steering wheels, I'm sure it would have been fantastic with sand in the bottom too. The kids most likely had a ball... for the ten seconds playing outdoors is tolerable.

But the problem with a wooden sandbox? First- scorpions and spiders LOVE sand. I'm guessing little tommy would not like to find that kind of surprise with his beach shovel in the backyard. Secondly, I don't know how or why, but the heat? The searing summer heat? It makes wood practically melt. 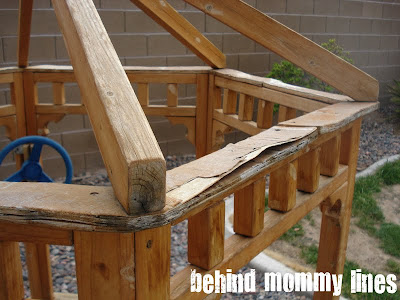 I believe the proper terminology is warp. 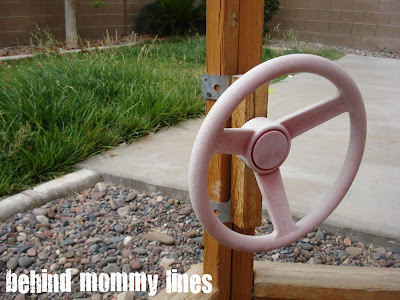 I would also like to interject an excuse about the lawn back there. We're trying to let it "seed" to fill in some of the bare patches. At least this is what The Husband says. It may just be a ploy to put off bringing the lawnmower over... and you know, mowing the lawn on the weekends. I don't know... and kinda don't care too much at this point. Let it seed!

Anyway, this little "gazebo" makes me sad sitting out there... pretty much decomposing. Abandoned, forlorn things make me all wispy. I would like to help it... but it was just a bad idea to begin with. (and it looks like a lot of... work. Meh)

Posted by craftyashley at 4:57 PM
Email ThisBlogThis!Share to TwitterShare to FacebookShare to Pinterest