Ok, let's talk hotels. Staying at a Disney hotel would have been entirely out of our budget if it weren't for the convention discount and Close to My Heart picking up a couple nights. (have I exhausted you enough with how much I love everyone over at CTMH?)

I was pretty impressed with the rooms we got at The Disneyland Hotel. I loved kicking up the air conditioning to a frosty 68. Not very "green" of me, but dude! I've been sweating since March. Mama needed a break.

The Disney designers really have an eye for detail. It's quite exciting to find all the Mickey themed tidbits in our room. 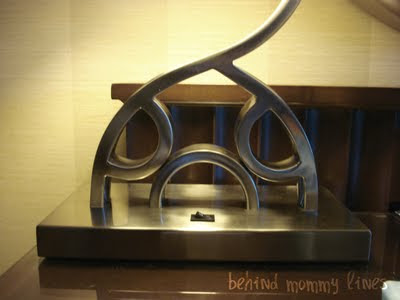 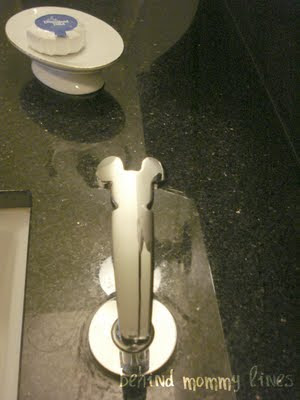 And my absolute favorite... 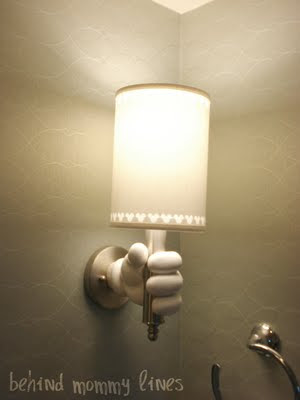 I want these sconces for my house!

The headboards were the kids' all-time favorite, castles! 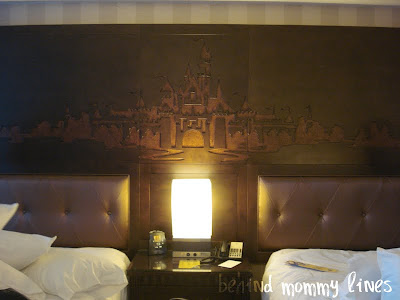 Pardon the bed situation. According to the twins, freshly made beds need a good jumping on upon arrival.

It got even better as I was fussing with the light on the nightstand... 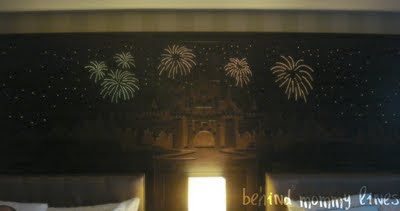 Your eyes do not deceive you, even though my photography skills are painfully lacking. After a sweet little "when you wish upon a star" song played, the entire wall lit up with twinkling stars and fireworks. It was nothing short of amazing.

Upon returning home, the girls were sad to find their normal, boring, non-firework beds in their rooms. It was a hard lesson that life on vacation is way more fun. (we're still stuck in the post-vacation blues over at our house- real life just doesn't  have enough carousels and Little Mermaid rides)

Some things about the Disney resort:

- Parking is far from your room. Leave one tiny thing in your car, and you're in for a 15 minute walk out to retrieve it. Most of the time it wasn't worth it... hence the reason I left my guide in the car... and left it there for a couple days.

- Even though we were pretty close to Downtown Disney (literally across the street) it seemed like everything was really far away. The Disneyland Hotel is split up into three towers, we were not in the main tower; so the front desk, unloading the car, pretty much everything becomes a "thing." (I'm sounding ridiculously slothful now! Ewww, walking!)

- As a guest of the hotel, you can take the Monorail from a station near the hotel into Tomorrowland. This would have been a bigger help except that the line to from Tomorrowland back to the hotel was always too long, so we ended up walking the entirety heading back to the room for naps.

- The hotel is under some pretty major renovations at the moment. The pool is under constructions, so only a bit of it was open. What was open was fun for the older set- crazy enormous water slides. The little ones were happy, but pretty perturbed about being too small for the big slides. The girls are such beginner swimmers, the ten zillion people at the pool that day made me a bit nervous. They do supply life vests free of charge which is nice.

I think we'd stay there again if we... won the lottery/struck it rich with oil in our backyard/pawned the girls off to Hollywood to become the next Mary Kate & Ashley Olson. All of which will never happen.

Posted by craftyashley at 9:33 AM
Email ThisBlogThis!Share to TwitterShare to FacebookShare to Pinterest