Sure, it's probably odd how much thought I have put into a tattoo I will never get. But it's fun to think about! What things have such meaning to me that I would want them permanently scarred into my body, and what sort of symbolism I would use to express these concepts. I love the idea of a tattoo. However, I am none too excited about unnecessary pain- and no matter how lovely the tattoo may be- there is stigmatism attached with those who have them. So I will probably never get a tattoo myself. It's better to just keep it in my little box of things I think about often. If I were to get a tattoo right here, right now... 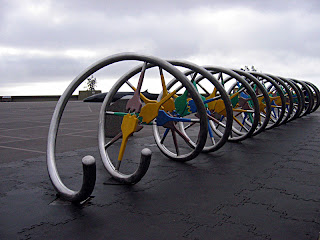 I would get a DNA helix. Like that up there. Except that helix is also a jungle gym
- how cool is that? 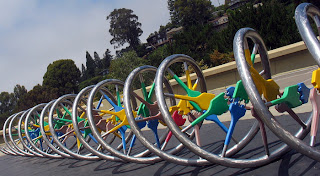 So cool.
Ok, so why a DNA model?
Well the DNA structure is a pretty neat image in and of itself. Plus it is a quite literal symbol of connection, family, heritage, etc. AND! The first initial of my kids first names are the same as three of the four bases of the DNA itself:

brush up on your long forgotten high school biology!
To complete the helix, I would need to have another baby and name it something that starts with a "T." I'm just not that dedicated to the cause.
If you were to get a tattoo, what would it be of, and what would it represent?
I love watching tattoo shows, like LA Ink and other such nonsense- mostly because I love listening to the stories the images represent to that person. Enough to carry them on their skin forever. It's quite a commitment, one that I respect. (I'm shy of commitment, another reason I am tattoo-free)
Posted by craftyashley at 9:10 AM
Email ThisBlogThis!Share to TwitterShare to FacebookShare to Pinterest