I am about to admit something to which I am entirely ashamed of.

The Husband and I bought a car... WITHOUT AIR CONDITIONING.

(I'll give you a minute to climb back into your chairs)

No, it's not Mallory. Mallory is perfect in every way. (she has a/c and heated seats, baby!) Nay, it was The Husband's car that we bought a couple days before buying a car for me and the kiddos. We were psyched to find a very low mileage Mazda3 for The Husband to commute to work in. It was sporty, cool-guy black (like Mallory; matching cars- wouldn't that have been so cute!) and it had a rad spoiler on the back. It exuded agility, speed, and a certain too-cool-for-school attitude. It had a lot of neat options on the exterior... the interior was another story. No power windows, locks, and even the side mirrors had a little knob you had to finagle to adjust. The Husband decided he could live with a stripped out interior if the exterior looked so awesome. The price was right, it had under 7,000 miles on it, and it seemed perfect.

While test driving the car, The Husband randomly asked the salesman, "does it come with air conditioning?" along with the normal car buying stuff you ask a guy selling you a fairly large purchase. I was embarrassed for The Husband, of course it had AIR CONDITIONING! Didn't everything?! The salesman chuckled and assured us it did. A zillion signatures later, and he drove it off the lot. I could tell The Husband loved that little car, head over heels loving that sporty car. He was coming up with errands to run, and taking the girls out on special trips in "Dada's car" the entire weekend. I took it out for a drive, too. I love Mazdas, and the 3 really is the "driver's car" the commercials make it out to be. Felt just like driving in a racecar. Zoom! Zoom! 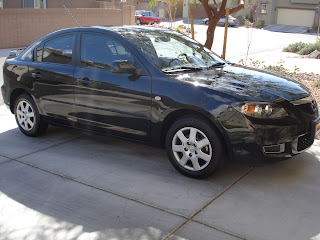 Hot Dawg!
To my delight, we arranged a special date night a couple days later and got my brave brother to watch the kids for us. We decided to take the little sports car out for an afternoon on the town. It was unseasonably warm that day; Our weather being finicky, a couple days it's frigid, (like 50 degrees) and the rest of the week is up into the 70's, so I flipped on the air.

We bought the snazzy little car on one of the cold winter days; The guy ran the air, and it came out cold. Inspection passed! But as we drove to dine in blissful childless peace, I was getting warm and cranked up the air some more.

It didn't take long to figure out something was terribly, horribly wrong. I perused the owner's manual, only to find that the A/C button in the diagram was not what I was beholding in person. I was staring at an empty button that would not click down.

The realization slowly soaked in: We had just purchased a car without air conditioning. (heart sinking into shoes) We live in an unforgiving desert in which the sun bakes its inhabitants into misery. The majority of the year consists of grueling, scorching temperatures that reach over 100, usually in the range of 115. Air conditioning is not a luxury out here, it's a necessity. Not having A/C out here is like not having airbags... or a motor... basically very ill-advised.

I carefully questioned The Husband if he was even considering keeping this car. He paused for longer than I was comfortable with. "It's practically a health hazard!" I blurted out. He knew we'd have to take it back. (we were fully informed about the 5 day return policy in which we were thankfully eligible) But we were both pretty emotionally attached to the car. It was sad to make the decision to return the car and start the search all over again.

I was freaking out because The Husband had to have a car by Monday. There was a serious deadline here. And I'd seen the lot of cars that were available- a whole fleet of Hyundai and Kia. (I don't consider either of these a valid option- especially since we want a car that the twins can eventually drive... which is never going to happen of course, those little girls will never turn 16- surely) We cut our much anticipated date short and drove down to a visibly embarrassed salesman. He apologized profusely for the mix up. I know he wasn't trying to bamboozle or con us.  At one point I felt bad for him because he was really berating himself over the predicament. It was certainly not a comfortable situation; All involved felt a bit of shame.

Returning the car could not have been easier. (Hallelujah!) They gladly took it back and we went out to surmise the potential prospects: high mileage Toyota Yaris' and again.. the Hyundais. The situation was looking pretty bleak. Until I spotted a little Toyota Matrix in the corner. It was larger than what we were looking for- The Husband specifically requested a small car that wouldn't eat up gas, and could fit into the abnormally small parking spaces at his job. Nonetheless, I scoped the Matrix out, and it looked promising! The price was right, the finishes were good, (power windows and doors- holla!) and it had low-ish miles. (can you tell I'm a stickler on mileage?)

The Husband balked. He detested hatchbacks. Loathed, even. As no other viable options were to be found, he protested, "But it's practically a STATION WAGON! Look! It has "wagon" right there in the description!" His cries fell on deaf ears; the car was perfect. 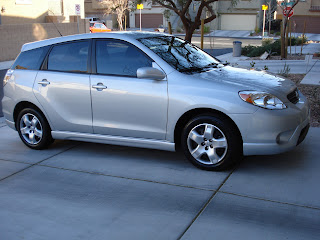 Mmm, Wagon-y goodness
He is still quite defeated about the whole thing. And I understand- the Mazda was pretty hip. (I almost feel bad because Mallory rocks so hard...) On the plus side, I lost a considerable amount of cargo space with the CX-9, it's not terrible, but now I use The Wagon to go grocery shopping. Cargo room is not a quality lost on me! After losing his fun guy-car, I tried to improve The Husband's spirits on our new purchase.

I named my car Mallory the Mazda, and I was hoping to perk up The Husband's sentiments by asking what he'd name "his" car. His answer? "I'll call it Todd. Cause it's dull and lame." (sigh) So Todd it is. (my apologies to anyone we know named Todd! I'm sure you are neither dull nor lame)

I'm still rather pleased with the purchases. Todd will work out great- and I am sure he will come in handy quite often- cause if there is one thing we do often, it's haul large quantities of stuff... like diapers. (I'm also sure The Husband will never admit to Todd's handiness)
Posted by craftyashley at 9:46 AM
Email ThisBlogThis!Share to TwitterShare to FacebookShare to Pinterest