Warning: I am going to ramble on about cars. And the kids to vehicle space ratio that seems to be out of whack at our house. (I can hear you rolling your eyes all the way over here) I know. I need to stop talking about it. And do something. I have been procrastinating for too long. I have been trying to convince myself that we can just keep the status quo and then I won't have to deal with car salesmen.

Now plugging my fingers in my ears and singing "It's a Small World" in avoidance of this subject isn't going to cut it. Decisions are going to be made. There's a timeline! And reasons to jump on this issue and ride it like I mean it. I am begrudgingly going to make! a! decision! Then, do! something! about it!

In case you lack the imagination needed to understand why new car arrangements need to be figured out, I give you this: 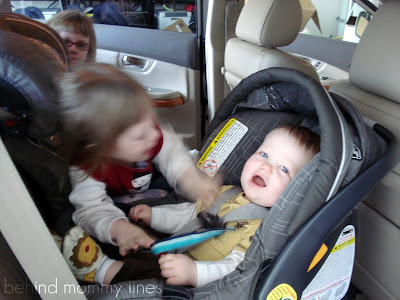 Need I say more? There's mayhem going on in that backseat. Nonstop Mayhem!
We need a third row. If for no other reason than preserving my sanity. All three children need to be out of arm's length from each other. This needs to happen as I am tired of refereeing three sets of fights and problems while trying to keep in my lane and drive like a normal, sensible human being. It should go without saying that it's unacceptable to take a baby's binkie away, or his toys... or hit your sister without (or with!) provocation! I feel for you families who have more kids than me. Surely you can't all drive tour buses to keep the kids away from each other. How do you do it?!
So I've compiled the options in a list- in all relatively the same price range. In case you find yourself in a similar situation. Or just want to make fun of minivans with me- either way.
Minivan: 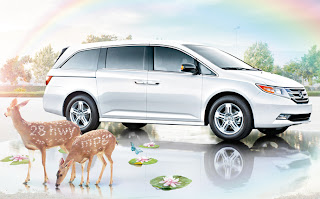 Lately most of the major car makers have revamped their minivan lines. I don't know how they managed to make the minivan uglier- but they did. Hideous! They must use magic hollywood-camera-angle-trickery to make the pictures/commercials of the thing look semi-passable. But in person? On the road? Repugnant! (I apologize if I'm offending you poor minivan driving, dare I say minivan loving, people. However, I will not be censored! I suggest you should look into the mind control that convinced you to buy a minivan in the first place) Although kudos to the clever marketing monkeys working with all the smoke and mirrors to make these vehicles appealing! Quite the clever campaigns have been run from both Honda and Toyota. Sadly, the old adage still holds true; you can put lipstick on a pig, but it's still a pig. If you'd like a good, hearty laugh, check out Nissan's Quest. And make sure you aren't drinking soda at the time- it might go up your nose; and that burns. (photo credit: Honda)
Whatever This Is: 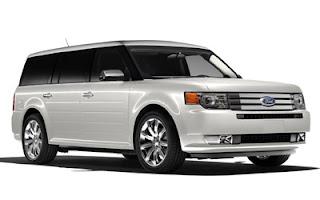 Well, at least the minivan isn't looking so bad. I actually know people who own these! And they like them! I should really suggest they get a good CT scan... just to be sure. It does have three rows. And... it's low to the ground? If that is a selling feature, I guess? It really does look thoroughly ridiculous, though. The Husband has offered this up as a possibility. That suggestion got him a swift punch in the arm. However, they are cheap-ish. Which may come into play as we are probably staring down the large possibility of replacing The Husband's ramshackle motored contraption, ahem... car as well. Ouch. Just thinking about buying two cars at once gave me a nauseous, painful feeling. (Image credit: House of Smith's Blog. Interesting story about how she got her Flex!) 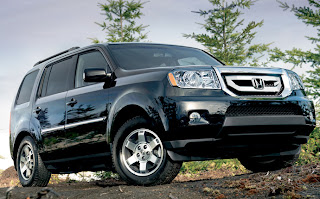 There are a few other vehicles which fit my loose criteria. But they get nixed from the list due to the fact they are ugly. With a capital U, spelled out by vociferous cheerleaders. There is a threshold of rugged and all-terrain-y that these cars have passed and driven into the unfortunate, nobody asked them to prom territory. The Honda Pilot is one of these, the other being the Nissan Pathfinder. Check out those terrible rear door handles on the Pathfinder- just terrible! (Image Credit: Honda)
The Chevy Choices: 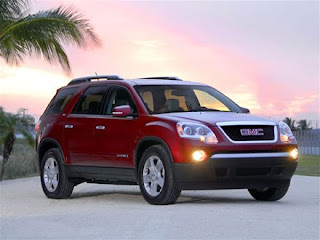 Ok. Now we're getting into the "real" options. The umbrella company that owns Chevy, GMC, and the now defunct Saturn, have three different sets of identical offerings. All based on the same platform, but ranging in styling and pricing. My favorite is the GMC Acadia (shown above: Image credit: here) and the Saturn Outlook. Chevy also has the surprisingly popular Traverse- which has an ugly butt. I mean... rear.

Seriously, look at that thing: 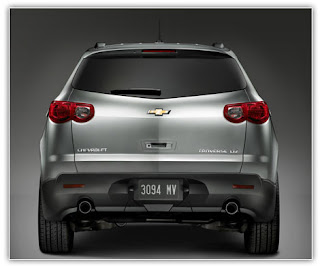 Image credit: here
I know. I'm fairly certain whoever designed this bad boy was attacked by a badger at the time the backside was drawn up. It looks even more ridiculous on the road, if you can even believe that.
So, here's the problem with the Chevy lineup: 1) I'm not too sure about Chevrolet. I just get the feeling that they are lacking in the quality department? It's just a feeling, however. 2) with all the financial uncertainty surrounding the brand, (I keep up with those kinds of things) I don't want to have a worthless hunk of metal on my hands in a couple years... Like all those poor people who invested in Saturns. Glad I didn't go ahead and by that Outlook before Little Man was born! 3) I dunno, the Acadia is nice. But it's a bit pricey for a Chevy. I'm a girl who likes accouterments like leather seats, DVD players, and backup cameras. But hey- it's still in the running. I am armed with a Dad who is better at negotiating and haggling than me. (I couldn't negotiate myself out of a paper bag) 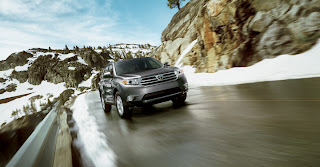 The Toyota Highlander. We rented one of these a few redesigns back, and really liked it. I was just recently informed they have an available third row. So  I threw this option into the mix. They are quite smart looking! I'm not so much put off by all the recalls, either- which is surprising. And while I know this should make zero influence on my decision: The curly headed little boy they have on the commercials? I love him. He's so darned cute! (Image Credit: Toyota)

What I Think I've Decided On:

Image Credit: Mazda
I really like the Mazda CX-9. It's both stylish, and seems to be large enough to fit my crazy brood. I actually embarrassed myself in public when I saw a lady parked right next to me at Target loading her bags into her CX-9. She was gracious enough to let me see how much more space there was compared to my current car. Even with the third row up, I've got enough stroller and grocery stowage room. Mazdas don't get enough cred. I've seen quite a few out there, but rarely a commercial for them! I loved my Mazda3 pre-kids. I was sad to let it go. (Well, kinda sad, I was glad to be rid of ramming the front seats all the way up to accommodate two infant carseats in the back- it's no fun driving while being smooshed up against the windshield) I'll have to check the Consumer Reports: Car Edition on what the reliability/drivability/etc. stats are. (I always consult my Consumer Reports. Always) But the CX-9 is my front-runner so far.
We'll see what happens! What will eventually pull into my garage? I dunno! Stay tuned for the epic conclusion that nobody is holding their breath for!
And on a completely random side note: can I get an AMEN! for binkie leashes? 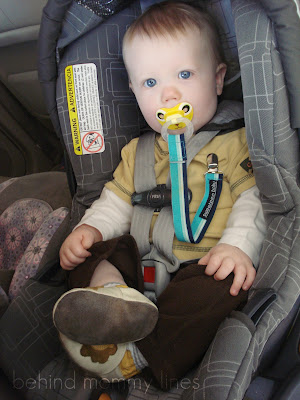 ...keeping the tentative peace one drive/stroller ride at a time.
Posted by craftyashley at 1:24 PM
Email ThisBlogThis!Share to TwitterShare to FacebookShare to Pinterest