We Did Things Today

The fog of sickness is beginning to lift and blow away from our beloved little cottage. (yay!) While everyone was feeling less sick, nobody could be accused of feeling great either. With the cold weather, the girls played outside for five minutes and ran back in with ice cube hands. So we did things. Things that usually are huge no-nos around these parts. We had a blast!

The girls played in their room! With whatever toy they could drag up the stairs and stuff on their bed. I have been pretty firm on this no playing in the bedrooms. Bedrooms are just that- rooms with a bed- for sleeping. We have a playroom (for playing). Mommy needed a break, the girls needed a new experience, so I watched last night's Grey's Anatomy in bed while the girls ran upstairs and downstairs with toys in hand. It was lovely to hear the squeals of delight at this new game. (no more, though! Gate is back up!)

I was not this awesome in the morning. No. Here's a little first draft I typed over breakfast:

Yes. We're all sick. And being miserable is just the only way to be when everyone is sick. But the misery has reached a new dimension.

Yesterday, I lost my sense of smell- and even worse- TASTE. I cannot taste ANYTHING. This is an alarming and perplexing development. I know I am stuffed up beyond belief. But not being able to taste my food?! C'mon, now! That's a low blow. I downed a bag of pita chips with sea salt; nothing. A homemade apple pie; nothing. Everything just has a texture, but no taste. If this goes on much longer, I will lose my will to live. I just want to be able to TASTE my jalapeno burger! My brain wants some taste! Eating is so confusing for my brain now- my tummy is full, but my need for salty or spicy things is not satiated. Same thing with the brownie I just ate for breakfast. I want some sweet! This is unnatural! Unholy! If I don't taste something soon I'm gonna die! I'm gonna die! (echo! echo!)

Things perked up at lunchtime when I took everyone to Carl's Jr. for a jalapeño burger. I tasted THAT! (the peasants rejoice!)

Also- I bought milkshakes. For the twins. The girls who usually have very small and limited amounts of sugar. I ordered "small chocolate milkshakes." What came out of the drivethrough window were massive shakes topped to the brim with whipped cream. The shakes were bigger than Squirt's head. It was glorious to watch them in the back seat, sipping up their big treats!

Then I threw them in the freezer for naps, and upon waking, we ran them through the blender and had milkshakes. for. dinner.

Also, I almost hugged the UPS guy. (not The Husband- the actual guy who delivers the boxes to my doorstop) He dropped the latest box off at the door and did not ring the doorbell! This let naptime continue without a hitch. Bliss.


In the box was Sophie. Sophie the Giraffe. I'd heard rave reviews extolling Sophie's teething baby taming. I eagerly awaited her arrival. (Little Man sprung his first tooth last week) I needed help. Like teething backup.
This guy is driving me nuts: 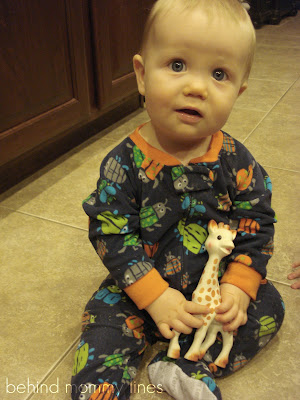 Save me, Sophie!
Note to self: always lock the dogs up in the pen whenever the kids have food. This dog actually snatched a teething biscuit from that baby's hand! You vicious felon! Preying on the wee young 'uns. Shame on you. 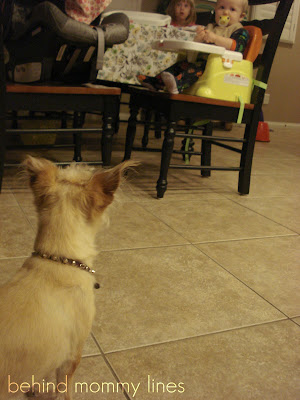 I just couldn't let the sadness of a lost cookie to a little baby ruin the night! Two teething cookies for Little Man! Would you like some apple juice with that, sir? As long as you are pleasantly noshing in your highchair, Mommy is fine giving you the entire contents of the fridge!
Posted by craftyashley at 5:53 PM
Email ThisBlogThis!Share to TwitterShare to FacebookShare to Pinterest