Remembering why I hate traveling.

We had a plan. There was a plan! We had a late flight to give my family time to drive back home and be able to pick us up at the airport. So we had an entire day to burn. We had checked out of our hotel, miraculously my mother obtained a late check-out. But we would be napless, and I was worried about that. So we planned a small jaunt up to a resort town with an outlet mall. The hope was the twins' could squeeze in some zzz's on the drive up or back. (even though my kids are not the car-sleeping-type) We'd spend a couple hours shopping, then drive back down to the "hairport" and fly home.
All went well until we had been in the Gap Kids Outlet (squeal) for all of 10 minutes. The girls were running around like banshees, and The Husband was thoroughly bored out of his gourd. I think I heard him say "We simply can't do this for two hours." I (begrudgingly) agreed. A new plan had to be hatched.
MOVIE! We wanted to see Despicable Me anyway. So I asked the Gap cashier where a movie theater could be found in this small resort town. We got directions from her, a person at a gas station, and a hotel desk clerk. It took that long just to find this tiny theater tucked away in a condo complex. But guess what? No Despicable Me! Only Toy Story 3, (which we'd seen a million times) some movie called Ramona and Beezus (which looked super lame) and a couple more adult films. (not porn or anything, just not cartoons) So I asked the movie theater guy where the other theater was that was playing the movie we wanted. Again, we were lost. A guy at the 7-11 told us it was right behind Albertson's. There was no Albertson's. Thankfully, I just took a chance and darted behind a Fresh Market. Bingo.
We got there JUST IN TIME. The problem? It was a 3D movie. The glasses didn't fit on the girls, and it was really fuzzy without the glasses. Also- can I just say- I now hate 3D movies. It was the first one I'd seen. It was annoying, the 3D. Cemented my opinion that 3D is nothing but marketing crappery. Hate 3D. I want to go see this movie without 3D. It would probably be loads better. So there you have my thoughts on movies!
So anyway... it was a long day, killing time. Luckily, the twins fell asleep in the car on the way over to "where the hairplanes live."


I had to document this rare event in our lives: 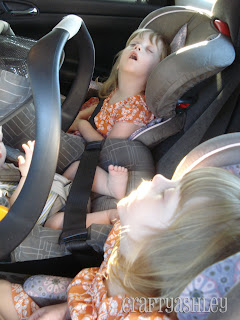 Did I mention that during dinner the girls had a few "setbacks" in potty training? Yes. I became intimately familiar with the bathroom at Ruby Tuesdays. It was on the complete opposite end of the restaurant from where we were seated. Back and forth, back and forth. Out to car to get even more underwear. They had been doing so great the whole trip! We didn't even have to use the backup undies! I had apparently used up all of my luck. The airport was no different. In and out of bathrooms. Tons of false alarms. And even when we were on the plane, The Husband was shuttling twins back and forth to the bathroom.

I didn't think there was any way the poop situation could get worse. But it did.
As soon as we were taxiing down the runway, I heard and felt it. Little Man was carpet bombing his diaper something fierce. There was no hope for his poor Huggies. They simply could not contain the load. Up the back of his onesie it went... then down the legs too. I knew from our flight out how crazy strict flight attendants were about restraints. I knew I couldn't even hope to change him until we were firmly in the air and the seatbelt light had turned off. It was horrible. I could smell it, it was dripping all over me. But what was worse- I knew the whole plane could smell it. (The Husband verified this for me) It was an agonizing half hour of taxiing, taking off, and simply waiting for the tiny light to turn off. I stared that light down, willing it to just shut off! That tiny light proved to be a sizable opponent.

By the time we landed (at 10:12 our time, but 11:00 in the time zone we had been living in for the past weekend) I was mentally and physically exhausted. I wanted to personally apologize to every poor soul on that flight. But I couldn't. I had to haul stroller to the baggage claim.

Let me tell you something, getting around an airport with a stroller? No easy feat. Airports like escalators. Our last harrowing escalator ride made me abide by the "no strollers on escalator" rule. So I was constantly in search of the elusive elevator. One lady, while loading a wheelchaired man into an elevator as I waited, glanced over, and with a snobby little flip said "this elevator is for employees only. You need to go down there." Down there... to the elevator 10 minutes away. Thanks. You're a gem.

Of course, in the face of all my hurrying, I arrived to find a still running bag carousel swinging nothing but our bags around in a circle. Everyone else? Gone. Missed it again. And now! One of the carseats was missing!

Long story short, we got everything (finally) into our waiting car, and headed off on the highway. Only to find that the interchange to get onto the next freeway, the freeway that takes us home, was closed. Whole thing. Closed. So at 1am, with cranky children, screaming baby, and two very tired parents, we were navigating surface streets for over half an hour trying to get home. It is at this point that I informed the husband we are never traveling ever again. If people want to see us- they know where we are.

We got everyone into their beds, got some of the luggage out- only the important pieces- and crawled into bed. As I laid there, the sheets clinging to my sweaty person, I realized something- I miss the hotel.

At the hotel we had the thermostat set at SIXTY FIVE. It was too cold! We had to bump it up to 68 by the end of the weekend! It was heaven! And I didn't have to make the beds. Just to keep our air conditioning from giving up and calling uncle, we have to leave it at SEVENTY EIGHT. It is hot. It is almost impossible to sleep. I miss falling asleep- being borderline cold- knowing that in the morning, someone else was going to make my bed.

So there you have it. A long, whiny tirade about traveling, traveling with children, and (oddly) 3D movies. While we had a great time, I am in no hurry to do that again. Perhaps when science perfects the art of teleportation. Then I'll get back into the traveling game again.

And for all those "driving" proponents- I'm still 100% glad we flew. Just driving the half hour to the resort town was enough to prove that my kids don't do well together in cars.
Posted by craftyashley at 4:15 PM
Email ThisBlogThis!Share to TwitterShare to FacebookShare to Pinterest