- Painting should cause massive weight loss. According to my estimates, I should be a size 2 by now.
- The color I chose? The entire idea to paint this very day? Total impulse. I purchased three cans of paint, color... sight unseen. I planned to get a swatch, see it in different lights, just generally scrutinize the crap out of it. No. The color I wanted to look at was discontinued. I'd only seen pictures of it online. I was feeling sassy, so I just bought it.
- Since it was a 'discontinued' color, I got to choose what brand of paint the color was mixed into. The guy asked "Glidden or Behr?" [blank stare] It was then he gave me a third option: The cheapest thing possible. It was like this paint guy in the dirty apron was daring me. Not one to turn down a dare, I went with the cheapest thing possible. The brand? Speed Wall. White can, stark black lettering. Twelve bucks a gallon. (what could possibly go wrong? It's all just paint... right?!) Everything about it screams generic. As in Cheerios are to Toasted Oat Cereal as Paint is to Speed Wall.


- Can I have paint and paint accessories in my house for more than an hour without painting? No. I had every intent of saving it for the next day. As soon as I got home and dropped the cans on the table, the paint started calling. I threw some up on a couple walls at 9pm. After everyone had gone to bed, I was rolling on paint in really poor lighting- (as not to wake the sleeping children) the next morning proved this to be a really bad idea.
- I freaked out that night because the color looked REALLY BAD with my carpet, cabinetry, and tile. It looked like baby barf. Baby barf on my wall. But being the cheapness that I am, decided- too bad. I was painting the majority of my house this color. Luckily, it dries into a more beigey creaminess and less of a greenish barf.
- The cheapest paint possible? It's not like the Glidden or the Behr. It's like painting your house with water. I'm undecided on whether this is good or bad. It seems to get into the little crevices pretty well. It's kind of annoying though. The paint barely hangs onto the brush. Cheap paint... hmmmm. I think time will tell.
- I really don't understand the paint categories. Flat, Satin, Semi-gloss? I read that Flat is good for most areas like bedrooms and living rooms, etc. Satin is the same, but is a bit more scrub-able. Semi-gloss they reserve for kitchens and baths... because you can really clean it.
My ENTIRE house is semi-gloss. Who doesn't want the ability to really clean a wall? When does NOT being able to clean something become a selling-feature? Especially with small children, with their sticky jam-hands. I can see a trail of dirt and stickiness at their height that goes right along up the stairs. The lady at the home builder's design studio called it "washable flat." I wish to drive to her house at 2 am, ring her doorbell until she wakes up, then give her the stink eye.

- I am going to have to climb onto a 10 ft. tall ladder and paint a 2 story wall in the stairwell... with a roller on a long stick. Does anything about that sound a little sketchy to you, too? I've been avoiding this task. But it feels like a gigantic elephant in the room- no matter how much progress I make on the rest of the house, the stairwell will still be there... waiting for me.

- My helper, Trent (also known as my little brother) is apparently afraid of heights. He twitched a little bit just looking off the balcony at the two towering walls I was hoping to paint. I'm pretty sure I'm going to be the one on the ladder. I'm also fairly certain that as long as someone is there to call an ambulance when/if I fall, I'll only break an arm, or a leg, or something. Unlike Trent, I'm somewhat confident that it won't kill me.

- I don't believe in taping, masking, or dropcloths. They're for sissies. Plus, if a can of paint just happened to fall onto my crap builder-grade carpet... I would just have to replace it with hardwood.... and that would be a real tragedy.

- I'm playing it fast and loose with the paint. Except for my shutters. Those will be sealed up like Fort Knox. My shutters reside in a very special place in my heart. If they are even slightly tarnished with paint, someone is going to feel the wrath.

- The girls are being downright hilarious during the whole process. The first night I was painting, Bunny came storming up the stairs and yelled, "Stop painting my house, Mama!" I told her to stop bossing me around. Later the next day, she went pointing, wall by wall, and asking "You paint here, Mama?" Again, I told her I'd get to it. (Tanget: I asked Bunny to stop playing with her toys and get over to where I was so I could dress her. Her response? "I'm workin' on it, Mom!" ...as she kept playing with her toys)
Then, last night, I heard the girls fighting over who got to let the puppies outside (yes, big problems. Totally worthy of bopping a sister on the head... totally) I threatened them that I would have to stop painting and come down there. Bunny's response was a loud, "No! You need to paint a my house! You no stop paint! You paint that wall!" Ok, my tiny taskmasters, I'll get right on that. They are kind of peeved that I haven't completed the whole job yet. I mean really, I've had the whole duration of Toy Stories 1 and 2... and a Tinker Bell.

- Painting is always something that seems totally do-able... until you're doing it.

- This has turned into quite the long list of thoughts. Kudos to you for hanging on this long. You guys are the strong, the brave, the resilient, true readers of my crazy babble. Gold stars all around!


And when someone requests pictures, I am all too eager to oblige: 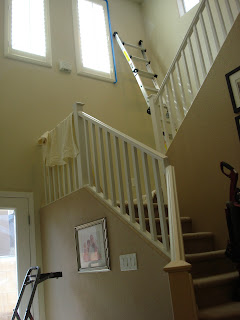 I fear I will never be able to finish, or reach the top of the ceiling, and my house will look like this forever. 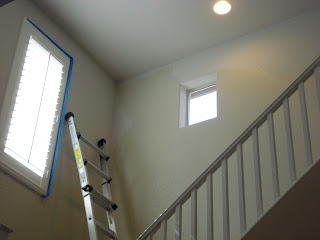 Can you even tell that it's a different color? It's the yellowy-tone. When dry, it is a very subtle beige. But it is soooo high up. I'm doing everything but climbing the ladder.

Posted by craftyashley at 9:19 AM
Email ThisBlogThis!Share to TwitterShare to FacebookShare to Pinterest