How To Address The Cat

My daughters have active and very vivid imaginations. They concoct the most hilarious games to play with each other, and now they are mastering vocabulary and the art of the spoken word- I am laughing non-stop at their shenanigans.

And the things they learn from TV? Just crazy. For example, I have been on my death bed the past couple days, and have been doing a lot of bottom-of-the-barrel-parenting. I have a general idea of where they are in the house, but have only vague hints as to what they are doing. So when they were in the bathroom, I assumed they were going potty (and they were- wiping their hind quarters with the entire roll of TP and trying to flush it down the toilet) they were unrolling the toilet paper- which The Husband must have left in grabbing distance- and wrapping long bits around their necks and talking about "snow." The only way they could have learned this was from TV! We don't own scarves! The last time it snowed, the twins were not even 2 years old! Oh my, the awesome power of television.

Now the new game is pretending to be a kitty cat. The only exposure to actual cats came in the form of my Grandparent's Mr Cat. (as seen here from a couple Halloweens ago) The girls LOVED that cat. He was the main attraction at Pop Pop and Grandmama's house- along with the fish. We don't (and never will) own a cat. So the whole feline thing was fascinating, and I'm pretty sure that is why 80% of the time, Squirt demands that she is a Cat. Her cat-name is Meow Meow, and she must be addressed as such... that is, if you don't want to deal with a rabid 3 year old fit. In fact, to talk to her, you must also assume the role of a kitty. Everything that escapes your lips must start and end with a meow.

For example: "Meow Meow, would you (meow) like a (meow) sippie? (meow meow)

I'd make a note of this, if you are to deal with my daughter. (I see you getting your paper and pen out!) The Bunny is less enthralled with this game, but will often play along... mostly to garner more attention. 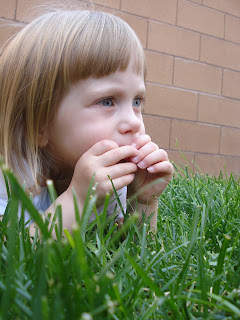 And remember, all good kitties keep their "paws" near their face at all times. They're easier to lick that way.
Posted by craftyashley at 2:55 PM
Email ThisBlogThis!Share to TwitterShare to FacebookShare to Pinterest