I was really worried there for a while. I could just envision the girls getting super jealous and doing horrible things to their baby brother, the kinds of things I did to my baby brother. (Sorry Trent, but you still stole my $6) But while they do have jealousy issues, it seems to be directed more at me than Little Man. They downright love their little brother! (I still have to keep an eye on them because they love him just a bit too much sometimes) 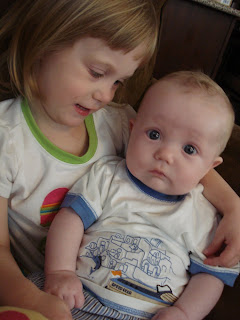 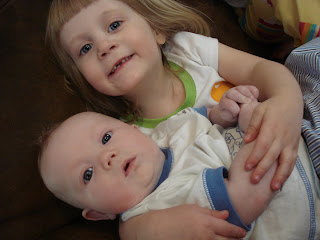 They always want to hold him, play with him (more like pile all their toys in his lap), and "pet the baby." They have a slight obsession with rubbing their hands on his head... especially when he's sleeping. They have the best of intentions, but that still leaves me with a startled-awake-baby.

Anyway. So that is going well, sibling relations. The potty training, however. Not so much.

Yesterday was particularly terrible. The Squirt vacillated between wanting to sit on the potty and being completely and utterly scared and begging me to "help" her. There was also a fight over Dora and Hello Kitty panties. There was crying. There was peeing on my floors. There was me screaming "We are big girls now! We don't wear diapers! Babies wear diapers! AND YOU ARE NOT BABIES!" There was random diapers in various stages of "use" strewn about my house. (they now know how to take off their own diapers... oh goody...) I swear, I had simply had enough.

And that is when the calvary swooped in and buoyed me up in the form of a facebook comment from a friend with twin boys that are a couple years older than my girls. She gets it. She understands. She told me that potty training two at the same time is like the Survivor theme:

You may all be chuckling a little bit. But I'm serious. I need to get my head in this game. Outlast being one of the trickier points of potty training twins. That gave me the boost, the mindset that I needed.

This is guerrilla warfare. (the worst kind because feces are involved) So now I have a new mantra: Outwit, Outplay, Outlast. I am not only going to win the battle, (getting someone, anyone to keep a pair of panties clean for a couple hours) nay, I am also going to win the war! (getting both to be in dry panties full time!)
Posted by craftyashley at 9:47 AM
Email ThisBlogThis!Share to TwitterShare to FacebookShare to Pinterest