I was feeling pretty darned proud of myself as I sat there in the Social Security Office. I had driven out to the Health District and got Little Man's birth certificate in less than five minutes! There wasn't even a line. I thought they were just going to mail it to me! Nope! I had it in my hot little hands as I left. Peachy!

It was then I started thinking, well, gee... that was easy. How about I just wander down to the Social Security place and have this mess all taken care of in a nice little bow by the afternoon! It was a little dicey locating the place with a navigation system that had 4-year old information, but soon I was there. Number 233. And they were currently serving number 223. Fantastic.

As I sat there, I got wind of a few of the transactions going on at the teller desks right next to me. One guy's roommate had stolen his wallet, and he wanted a replacement SS card. Did he have any kind of identification? Nope! But he made sure to tell the lady that he knew what his SS number was! Why couldn't they just give him a new card? (he later had to be escorted out by security) Things seemed to follow a similar vein. People had lost their cards and just showed up, expecting a new one. One lady sat next to me and asked "so what do you think they need to give me a new card?" Um, I dunno... driver's license, birth certificate? She had no clue!

I sat there smugly. I had called the 800 number, I had pre-printed and filled out the form off the internet, I had gathered all the required documentation. I was prepared. These other shmucks were not. How silly of them.

My number was called and I waltzed up to the counter to the twenty something young hipster behind the glass, with his Justin Bieber hairdo. (is it Jason? Jackson? Well, whatever) I even said "I'm going to be an easy customer today!" I handed him all my paperwork and waited for him to start clicking away at his computer. Instead he looked up and said, "Um, ma'am... (wait, who's ma'am? Why are you calling me ma'am? Is it because I only vaguely know who Justin/Jason/Jackson Bieber is?) You need his shot records. I don't even need his birth certificate, just his shot records.


I was perplexed, so I slid my "shot records" closer to his field of view: 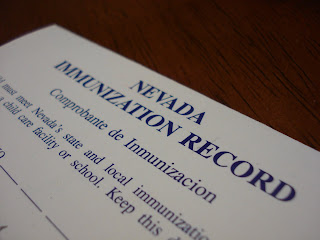 Not to mention that I had just gone from the central (super-icky) part of town all the way to the (slightly-less icky) west part of town, and now had to drive practically across the entire valley to our pediatrician's office to pick up a couple pieces of paper then hop in my car and drive back across town... Sounds like a super-fun way to spend the day, right? Oh, and did I mention I had awoken this morning to a major migraine headache which was only slightly subdued by the expired migraine medication I had taken a couple hours earlier? So I called various members of my family to vent as I made the trek across town.

The husband cautioned me to calm down because all the yelling probably wasn't good for my headache. My mother warned me I probably shouldn't be driving. Because when she drove with a migraine- she hit my car that was parked in the driveway. My favorite car. My New Volkswagen Beetle.

I took neither of their advice.

Anyway, back to the story of betrayal, extreme driving, and loud shouting from the confines of my own vehicle... I had now been told all different stories by three government employees that worked for the Social Security Administration. The first time I called the 800 number, a lovely gentleman told me I would just need the SS-5 form and his birth certificate... WRONG! The second time I called the 800 number (to inquire if I could get him a brand-spanking-new number) the lady told me I needed a birth certificate AND shot records... SLIGHTLY MAYBE WRONG! BUT CERTAINLY UNHELPFUL! I HAD SHOT RECORDS! (see picture above)  The third person, the hipster kid calling me ma'am, told me I needed just the shot records... WRONG AGAIN!

I was pretty sure nobody there knew what they were doing. But I jumped through their hoops. I needed their help. I did their bidding like a starved dog waiting for a bone.

My second visit to the Social Security Office started off in much the same fashion. I was number 267, they were currently serving 255. Yes, seriously! I came dangerously close to having Justin Bieber help me again. I was scared about that possibility. But thankfully I got a nice older gentlemen. He looked like my Dad. I liked him. He took both the shot records and the (supposedly superfluous) birth certificate and typed away.

I expressed my concern about how I had not received his cards in the mail. That I was worried someone stole his tiny, adorable identity. He glanced at his computer screen, "Nah, the hospital just requested a number and suppressed the mailing of the cards. Sometimes they do that just so you have to come down and request them so they go to the right address." Aw thanks, stupid hospital I gave birth at... I now hate you even more.

Nonetheless, I walked out of there with a paper assuring me the cards were on their way.
Posted by craftyashley at 2:18 PM
Email ThisBlogThis!Share to TwitterShare to FacebookShare to Pinterest