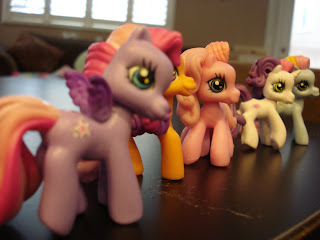 Ahhh! My Little Ponies!
(eyes start to glaze over in bliss)

Toy manufacturers have gotten wise. They know who holds the purse strings. It's parents like me: products of the 80's. We Punky Brewster watching, side-ponytail wearing, original Nintendo playing new parents. Flash some Care Bears merchandise my way- and out pops my wallet! Perhaps we're all trying to relive our childhood in a way- but what ever the marketing scheme is, it's working! I can now buy Strawberry Shortcake and Rainbow Brite stuff for my kids! Yes, sir! I will take it! Wrap it up, post haste!

And ok, fine... the girl's are lusting after that Ni Hao Kai Lan doll, sure throw that one in there too- she looks like she could have come from my childhood too- just a more politically correct, broader worldview version of my childhood. The girls seem to eat it up nonetheless... and now I know how to say "grandpa" in Chinese... invaluable.

And Yo Gabba Gabba? Um, yes! I was rocking to the Aquabats hard core during my "I'm so totally into ska music even though I'm still a miss-goody-two-shoes" phase. Even though I think some of those shows would make for a super-scary acid trip... I can bear to sing (and hear) the songs over and over again. (and besides, it makes me feel like I didn't miss out on anything when I turned down the option of becoming a pothead in high school) So jam another Muno action figure into that bag too, man!

And now.... I have all these toys that I wish I would have had when I was a kid. I would have been all over this bag of toys like white on the proverbial rice- although there is an extreme lack of the Popples on the market today. This needs to remedied. Once I get my kids a Popple, I can then be assured they will turn out just as awesome as I did. (wink)
Posted by craftyashley at 2:55 PM
Email ThisBlogThis!Share to TwitterShare to FacebookShare to Pinterest