One of Those Days

It started off innocently enough. We just needed to make a "quick" stop to my own personal Valhalla. (Target) Instead of getting super excited about riding in the minivan of carts, which they are usually ecstatic about, they demanded to walk. So walk they did... very slowly... touching everything on the way... stopping to play with a pack of sponges... almost getting hit by people pushing carts. I had had enough! So I stuffed them into the cart. That was when the screaming commenced.

I am a storm trooper in the store, people. There is no way I was ditching the stuff in my cart (all of which we desperately needed.) Try living without dishsoap because the kids threw a royal fit that week at the store... not going to happen. So that was us- the eardrum searing noises coming from aisle 4... then aisle 5... and behind you in line at the checkout.

And then it happened. They just stopped crying while I was swiping the card. My mind thought, Aha! Lesson learned! (In most situations, I probably would have bribed them with a toy. But no. A lesson needed to be learned) That's when I saw it. A sweet, very well-meaning older lady, giving the twins candy. Candy! (insert jaw dropping to the floor) O.M.G. I had just suffered through a half hour of twin meltdown hell in the hopes that they get the picture- mommy is in charge of this traveling circus. I watched it all fly out the window with one bite of the sweet stuff. I was super polite, thanked her profusely, and slunk away to the car- defeated. Once all the purchases, baby, and twins were loaded into the car- my captive audience... I unleashed my fury. Yelled like I had never before. How could they have been that horrible?! How dare they scream and carry on like that in public! Ugh.

It was only 11:30. The day had to continue. And it probably shouldn't continue with the raincloud following me. So there were toasted cheese dinosaurs. (Have you seen these hanging at Smiths?! Pick one up! They're so much fun!) 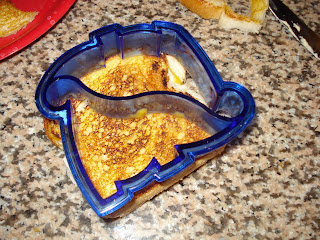 I collapsed on the couch and scarfed a couple Reeses Eggs that I snagged at the checkout. I buy sweets when I'm stressed. (and now we all know why craftyashley is fat) The girls were playing somewhat happily, (after Bunny stopped locking Squirt in a dark bathroom) when they both ran onto the chair and proclaimed, "Momma! There's bug on trains!" I tried to ignore this. I really did. But after finding a suspicious looking (cough::brown recluse-ish::cough) spider in the garage, I decided to check it out.


This is what I saw: 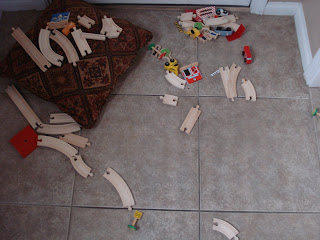 Anyone spot the bug? (The girls were too scared to actually come show me)

It only took like ten minutes to find it. Duped again by a tiny bug... 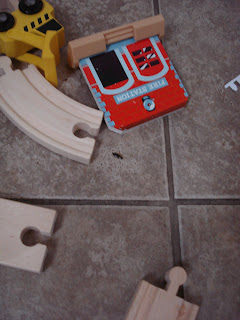 Posted by craftyashley at 1:16 PM
Email ThisBlogThis!Share to TwitterShare to FacebookShare to Pinterest